PODCAST: Birthing the Hog (I)

Pierre Sprey & the A-10
The Blaster Blog is full of stories lamenting the Pentagon's preference for gold-plated boondoggles that perform poorly on real battlefields at ever higher costs.  There are a few — far too few — exceptions to this pattern.  One of the most outstanding is the Air Force A-10 Warthog, affectionately known as the "Hog" — a superb combat airplane that the Army and Marine grunts love and the Air Force hates.  Readers unfamiliar with A-10 and the background issues surrounding the never ending debate to kill the Hog will find earlier postings at these links:
That the A-10 performs so well in real war is no accident.  How the A-10 came to exist is a case study in how to fix the Pentagon --  in terms of (1) understanding how the pathological culture in the Military-Industrial-Congressional Complex routinely produces weapons that do not work as predicted — but always at ever higher cost; and (2) understanding what it takes to overcome that culture to produce a truly superior weapon at a lower cost.
Attached below, is a podcast where Dan Grazier, a former Marine grunt with experience in real war, interviews Pierre Sprey — one of the central figures shaping the evolution of the A-10.  Sprey describes his efforts ranging from the systematic (and unique) effort to (1) translate the hard-earned lessons of combat into design specifications; (2) then convert those specifications into an efficient, cost-conscious acquisition program — one based on the concept of disciplined engineering via trial and error experimentation at the component level to rigorous testing based on competitive prototyping at the system level, and (3) making the final prototype selection based on a competitive flyoff/shootoff, where each prototype is flown by combat-coded pilots in realistic combat conditions.


Caveat: Readers should be advised that I am biased for two reasons: First, Sprey is one of my closest friends and has been a colleague since the late 1970s. Second, I had a bit part in the A-X development program during the late 1960s as a 23-25 year old Lt/engineer in the Air Force Flight Dynamics Laboratory, where my office — which was at the opposite end of the food chain described by Sprey — was involved in performing analysis of combat data and evolving the live fire tests to reduce the A-10's vulnerability to air defense guns. 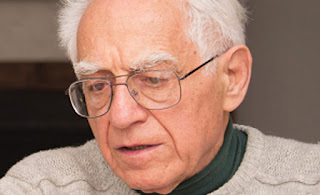 Pierre Sprey. (Photo: Jim Stevenson )
The A-10 has proven itself to be one of the most venerable and capable aircraft in the US arsenal. It is also an aircraft most people in the Air Force never wanted and have spent years actively working to send it to the scrap yard. It is the first aircraft every designed from the very beginning to be solely dedicated to supporting ground troops. Generations of American soldiers and Marines have come to love the jet for its unique abilities to free them from jams and to help accomplish the mission. The A-10 achieved this status through a unique set of fortuitous events and a few brave and dedicated individuals who dedicated themselves to making sure the men and women fighting one the ground would receive the support they needed from the air. Pierre Sprey, one of Robert McNamara’s “whiz kids,” played a key role in the creation of the A-10 and recounts this incredible story.

Show Notes:
Air Force Headquarters Starving A-10 Squadrons (Again)
A-10 Saved by Congress but Operating on Borrowed Time
How much damage can the A-10 Thunderbolt endure before being shot down?
Why the A-10 Warthog Is Such a Badass Plane