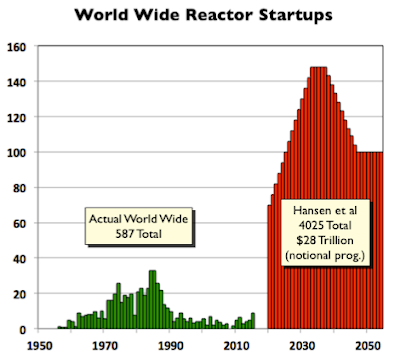 Discussion
Hansen et al justify this immense buildup of nuc power stations by claiming the risks posed by these nucs are small relative to the catastrophic risk of climate change.
So, let’s consider the balance of risks posed by the uncertainties implicit in this portrayal. When one begins to relax the planning assumptions in the name of realism, unit costs will increase, as will total program cost, schedules will stretch out, the reactor buildup (the red bars) will shift to the right, and the age of the existing inventory of reactors will increase. The theoretical date of decarbonization would be pushed ever further into the future, bringing into question the whole rationale for the crash program.
While Hansen et al claim this kind of crash program is needed to prevent a hypothesized climate catastrophe, there is obviously a lot of risk for real human and material screw ups in building and operating so many nuclear power reactors so quickly. They ignored these risks in their oped, but it behooves one to think about them.
Commercial nuclear power has an impressive safety record, with only two major catastrophes in 50 years out of the 600 reactors built to date: one light water graphite modulated reactor (considered by many experts to be a dangerous design) exploded at Chernobyl, and several more modern light water reactors at the Fukushima plant were seriously damaged by the effects of a major earthquake.  Both accidents resulted in terrifying radiation leakages.  While the causes of these catastrophes were very different, each had horrifying environmental and human consequences. The full extent of these consequences will not be known for generations, given the nature of radiation damage to organic tissue and DNA.  The worst incident is US history was the partial meltdown at Three Mile Island, fortunately contained. Note how Figure 1 shows that actual world wide nuclear power plant construction slowed to a crawl. That slow down was caused in part because of the quite reasonable fears raised by these incidents.
But there is more to the slow down.  Construction of new reactors has also been slowed by recurring safety issues in existing reactors, including (1) the intractable technical and political problems of radioactive waste disposal; (2) reactor management and operational issues related to poor quality control, deficient inspection and safety procedures, and questionable compliance reporting; and (3) the effects of aging of existing reactors and supporting equipment.
Yet the primary reasons construction of additional new Reactors in the United States stopped between 1978 and 2009 were related to the huge cost-increases and substantial schedule slippages in construction — i.e. due to management fiascos including poor planning and financing. Because of these fiascos, the taxpayers were made to foot bill on many of these projects.
Given this management history, coupled with the current neo-liberal business culture’s obsessive focus on short-term goals and profits, the high up-front costs for a new reactor exceeds the loan borrowing capacity of most utilities. Therefore, in the US, investors demand that the government subsidize loans with federal guarantees. How such guarantees will be arranged around the world is yet another subject Hansen et al deigned not to address.  But if past is prologue, the real cost of the world wide program in Figure 1 would be well in excess of $28 trillion and investors will demand guarantees that will ultimately be paid for by consumers.
There is yet another obvious if subtle risk factor that was totally ignored by Hansen et al: It must be assumed that the dramatic slow down in recent construction has been accompanied by a decrease in skilled nuclear operator labor, as well as engineering and hands-on nuclear program management expertise.  That consideration raises a question how safe and feasible it would be to rapidly expand to a crash program that multiplies total reactor production by a factor of 6.7 in only 70 percent of the time it took to produce all reactors in the world to date.

Conclusion
Perhaps the biggest weakness in Hansen et al, however, is logical. The case for decarbonization of power production has always rested on what environmentalists call the precautionary principle.  This is not a scientific principle but rather an argumentative proposition designed to justify a course of action. It does so by purporting to account for uncertain future risks associated with problems posed by damage to a “commons.”  Garett Hardin brilliantly analyzed the difficulties of coping with this kind of problem in a seminal 1968 paper entitled The Tragedy of the Commons (ironically, his subject was the risk of nuclear war and morality).
The precautionary “principle” in its current incarnation argues that if an action or policy has a suspected risk of being dangerous to the public or to the environment, and there is no scientific consensus that the action or policy is not dangerous, then the burden of proof that it is not dangerous falls on those taking an action. The conjugation of “suspected” and “not” in this construction means that the person charged with the burden of proof must prove a negative — which is impossible.  The precautionary principle makes for a powerful emotional argument, particularly combined with an exaggerated sense of fear, because it turns the scientific principles of falsifiability and conditional truth on their heads.[4]⁠  Moreover, invoking the Precautionary Principle places no logical limits on the upper bound for the cost of an ‘ounce of prevention.’ Anyone who doubts the power of this argument should examine how successfully the Pentagon uses the precautionary principle (in the form of inflating future threats) to jack up its budget⁠.[5]
But even if one accepts the precautionary principle in this case, one must admit that it must also apply to nuclear power.  Hansen and his colleagues are claiming that the theoretical and unprovable danger posed by CO2 [see endnote 1] is more dangerous than the dangers implicit in an unprecedented expansion of nuclear power.  The proof that nuclear power is both costly and very dangerous is far more obvious and far more empirical than any theoretical future dangers posed by global warming: Chernobyl and Fukushima, not to mention the lesser dangers in Rocky Flats, Hanford, etc. are proof of nuclear power’s clear and present danger.  Yet against the social and economic costs of this known danger, Hansen et al would have the reader believe that the cost of a hypothesized catastrophic danger in the future is greater than the known danger.
So while Hansen et al's CO2 argument is based on the precautionary principle, the clear and present danger inherent in their proposal to unleash an unprecedented crash program in nuclear power plant construction makes a mockery of the very principle they rest their case on. And that, dear reader, is a logical absurdity.
——————
[1] See Professor John Christie’s statement and Professor Judith Curry’s statement to Congress for succinct statements of the some of the problems of these computer models.  The short video of Professor Freeman Dyson’s fascinating critique is also useful for people trying to understand the modeling problem (about 9 minutes into the video) as well as larger issues surrounding the alleged dangers posed by carbon dioxide. All of these critics agree with the physics of CO2 being a greenhouse gas.
[2] Currently, the cost of nuclear power — particularly the capital cost — would be prohibitive without substantial government subsidies (in the form of long term government loan guarantees).  Even if one believes the very unreliable and typically optimistic cost life cycle cost estimates for nuclear power, on average, life cycle costs would as much a 2.6 times coal (w/o co2 scrubbing), 1.05 times coal (with scrubbing that removes up to 90% of the CO2),  and 1.6 times natural gas, in $/MW-hr.
[3] Each plant usually has between 1 and 3 reactors. The US, for example has 61 plants with 99 reactors.  Japan is home to the world’s largest nuclear power plant with 7 reactors.
[4] This video clip from one physicist Richard Feyman’s famed Messenger Lectures is a brilliantly simple and humorous explanation of the scientific principles of falsifiability and conditional truth.
[5] The inmates of Pentagon routinely invoke the precautionary principle plus the politics fear to jack up defense budgets — but it goes by a more straightforward term: Threat Inflation (e.g., the Bomber Gap, the Missile Gap, and the Window of Vulnerability during the Cold War. 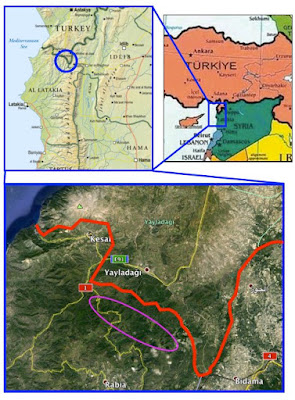