Sleepwalking Into a Nuclear Arms Race with Russia 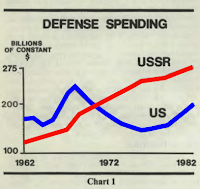 "The combination of the Soviets spending more and the United States spending proportionately less changed the military balance and weakened our deterrent. Today, in virtually every measure of military power, the Soviet Union enjoys a decided advantage” …
If my defense proposals are passed, it will still take five years before we come close to the Soviet level.
Mirror imaging Reagan’s argument, Russian defense advocates emphasizing the dangers of the U.S. spendup are likely to point out that the United States and its allies are already spending far more on their military forces than Russia is spending. Moreover, America certainly intends to rapidly increase the size of this spending advantage, because the large new American nuclear modernization program is only part of a yet-larger long term spending buildup.
After all, have not President Trump and Senator McCain proposed  huge increases to President Obama’s defense budget to rebuild what Messrs. Trump and McCain claim is a “depleted” military (see link 1 and link 2 respectively)?  Advocates of increased Russian defense budgets might also ask, are not Messrs. Trump and McCain declaring an emergency by calling on Congress to exempt defense spending from the spending restrictions imposed by the Budget Control Act of 2011?
Indeed, Russian politicians, echoing Mr. Reagan in 1981, might construct a graphic using the West’s own numbers to prove their points, beginning perhaps with something like this (Chart 2): 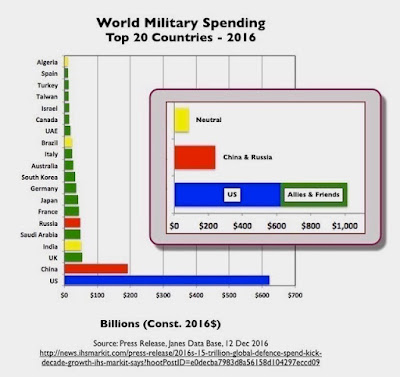 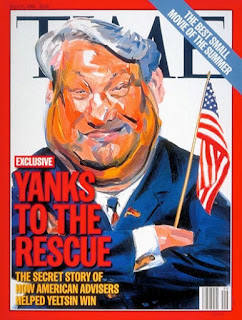 July 15, 1996
So, from a Russian perspective, the recent increasingly severe U.S. sanctions are not only hypocritical, they certainly reinforce the view that the U.S. led campaign to cripple the Russian economy is ongoing and perhaps endless.
Moreover, the rapid, opportunistic expansion of NATO and the EU created a kaleidoscope of internal frictions.  Now both institutions are in trouble, riven by contradictions and disharmonies.  Great Britain is leaving the EU but will remain in NATO. Northern Europe and the EU bankers are imposing draconian austerity measures on Southern Europe, particularly Greece. Turkey, long a key NATO ally, is turning to Russia while being rejected by the EU.  The destruction of Libya, Iraq and Syria, under U.S. leadership with European participation, has created an unprecedented flood of refugees into the EU, deeply threatening the EU'S organizing principle of open borders.  The increasing tide of European instability and chaos, accompanied by the looming specter of growing Fascist movements from Spain to Ukraine, inevitably add to the traditional Russian sense of being endangered and encircled.
That sense of endangerment is certainly heightened by a recent creepy piece of nuttiness coming out of Poland, perhaps the most Russophobic member of the EU and NATO.  The German daily DW says Jaroslaw Kaczynski, a very conservative former prime minister of Poland, chairman of the ruling nationalist-conservative Law and Justice party (PiS), has called for a massive EU nuclear force — trading on Polish fears that the United States will not sacrifice Chicago to save Warsaw.  That France and Britain already have nuclear weapons and are members of NATO is, of course, left unsaid in Kaczynski’s demagoguery.
Russian leaders cannot ignore the fact that Kaczynski called for a nuclear EU shortly after the U.S. 3rd Armored Brigade Combat Team of the 4th Infantry Division (3,500 troops and 2,500 vehicles) deployed to Poland.  Even worse, the commanding officer promptly declared the brigade is “ready to fight,” though it is intended to “deter” any threat to Poland.  One brigade is a trip wire … or a kind of blank check that might be exploited for nutty reasons to trigger a shooting war — and as Kaczynski just demonstrated, nuttiness is afoot in that part of the world.
Now, if you were a Russian; and
(1) you remembered the West’s destruction to your homeland beginning in 1812, 1914, and 1941 together with the recent string of broken promises, economic exclusion, and destructive meddling in Russian internal affairs that made a mockery of the ideal of a post-Cold War common European home; and …
(2) you faced a country that excluded you from Europe, suborned your election and is intent on crippling your economy, a country already outspending you on defense by a factor of twelve to one while expressing an intent to increase that lopsided ratio in a major way; and …
(3) that country has already started a nuclear arms race with a hugely expensive across-the-board modernization program to buy atomic weapons some of which can be justified only in terms of fighting and winning nuclear wars;
What would you do?
To ask such a question is to answer it.  For patriotic Americans interested in increasing their real national security (rather than their national security budget), the nuclear issue boils down to a question of understanding the powerful impact of America’s spending decisions and actions on patriotic Russians.  In other words, it is a question of reasoned empathy and pragmatic self-interest.
Yet the mainstream media and the politicians of both parties in thrall to our MICC are working day and night to pump up anti-Russian hysteria and hype fear to ensure Americans remain completely oblivious to the powerful, dangerous impact of our senseless Obama-Trump nuclear spend-up on the Russians — or on anyone else, for that matter.
——————


Authors' background: Chuck Spinney and Pierre Sprey, between them, have over 75 years of Pentagon and industry experience in engineering weapons as well as in analyzing military systems effectivness and defense budgets.  Sprey was one of the early whiz kids in the Office of the Secretary of Defense (OSD) in the 1960s. He led the Air Force's concept design team for the legendary A-10 attack aircraft and, together with colonels Boyd and Riccioni, fathered the enormously successful F-16 fighter. Working in OSD in the 1980s, Spinney’s critical analyses of the Pentagon’s defective planning and budgeting landed him on the March 1983 cover of Time.  Leaving the Pentagon in 2003, he did an in-depth interview on the military-industrial-congressional complex with Bill Moyers which resulted in a special Emmy Award winning edition of Bill Moyers’ Now that aired on 1 August 2003.  Sprey and Spinney have testified before Congress on many occasions and were founding members of the Military Reform Movement led by their close colleague, the renowned American fighter pilot and strategist, Colonel John Boyd.
Posted by Chuck Spinney at 6:34 AM