Is DHS Hyping the Politics of Fearing Fear Itself?

Attached herewith is another important report on the growing flakiness of the so-called Russia-Gate narrative.  This story is becoming increasingly laden with complex twists and turns and dead ends: one interesting new twist in this tale is the role of empire building by the Department of Homeland Security (DHS) — our newest and perhaps least needed security/intelligence bureaucracy.  The author, Gareth Porter, describes the emerging role of DHS’s smarmy bureaucratic ambition to forge its own security narrative around its own elastic concept of protecting our nation’s “critical infrastructure.” IMO, DHS is creating of yet another unaccountable national security money gusher, powered by a toxic mix of patronage, secrecy, and the politics of fearing fear itself.
Gareth Porter has written several important books on national security policy; he holds a PhD in history from Cornell University, and he is one of the very best investigative journalists in America.  In 2012, he won the prestigious Martha Gelhorn Prize for Journalism.  Politically, Porter is a liberal, and his articles appear in liberal journals like Alternet, Counterpunch, Consortium News, Salon, Truthout, and the Nation — but his work also appears in the American Conservative and the Libertarian Antiwar.com.  He always searches for the truth, even if it leads him away from his leanings.  But be advised, Gareth is my friend, so I freely admit I am biased, so judge for yourself whether or not this is an eye opening essay.
Chuck Spinney
How the Department of Homeland Security Created a Deceptive Tale of Russia Hacking US Voter Sites
The narrative about Russian cyberattacks on American election infrastructure is a self-interested abuse of power by DHS based on distortion of evidence, writes Gareth Porter.
By Gareth Porter, Special to Consortium News,  Volume 24, Number 241, August 28, 2018
Reprinted with permission of author
https://consortiumnews.com/2018/08/28/how-the-department-of-homeland-security-created-a-deceptive-tale-of-russia-hacking-u-s-voter-sites/
[CS Note: this is slightly reformatted to ease reading, but not one word has been changed] 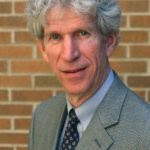 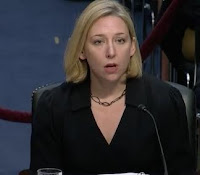 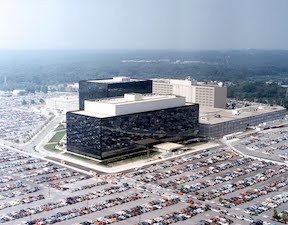 National Security Agency headquarters in Fort Meade, Md. (Wikimedia)
In April 2018, a CBS News “60 Minutes” segment reported that the October 2016 DHS intelligence report had included the Russian government hacking of a “county database in Arizona.” Responding to that CBS report, an unidentified “senior Trump administration official” who was well-briefed on the DHS report told Reuters that “media reports” on the issue had sometimes “conflated criminal hacking with Russian government activity,” and that the cyberattack on the target in Arizona “was not perpetrated by the Russian government.”
NSA Finds a GRU Election Plot
NSA intelligence analysts claimed in a May 2017 analysis to have documented an effort by Russian military intelligence (GRU) to hack into U.S. electoral institutions.
In an intelligence analysis obtained by The Intercept and reported in June 2017, NSA analysts wrote that the GRU had sent a spear-phishing email—one with an attachment designed to look exactly like one from a trusted institution but that contains malware design to get control of the computer—to a vendor of voting machine technology in Florida. The hackers then designed a fake web page that looked like that of the vendor. They sent it to a list of 122 email addresses NSA believed to be local government organizations that probably were “involved in the management of voter registration systems.” The objective of the new spear-phishing campaign, the NSA suggested, was to get control of their computers through malware to carry out the exfiltration of voter-related data.
But the authors of The Intercept story failed to notice crucial details in the NSA report that should have tipped them off that the attribution of the spear-phishing campaign to the GRU was based merely on the analysts’ own judgment—and that their judgment was faulty.
The Intercept article included a color-coded chart from the original NSA report that provides crucial information missing from the text of the NSA analysis itself as well as The Intercept’s account. The chart clearly distinguishes between the elements of the NSA’s account of the alleged Russian scheme that were based on “Confirmed Information” (shown in green) and those that were based on “Analyst Judgment” (shown in yellow). The connection between the “operator” of the spear-phishing campaign the report describes and an unidentified entity confirmed to be under the authority of the GRU is shown as a yellow line, meaning that it is based on “Analyst Judgment” and labeled “probably.”
A major criterion for any attribution of a hacking incident is whether there are strong similarities to previous hacks identified with a specific actor. But the chart concedes that “several characteristics” of the campaign depicted in the report distinguish it from “another major GRU spear-phishing program,” the identity of which has been redacted from the report.
The NSA chart refers to evidence that the same operator also had launched spear-phishing campaigns on other web-based mail applications, including the Russian company “Mail.ru.”  Those targets suggest that the actors were more likely Russian criminal hackers rather than Russian military intelligence.
Even more damaging to its case, the NSA reports that the same operator who had sent the spear-phishing emails also had sent a test email to the “American Samoa Election Office.” Criminal hackers could have been interested in personal information from the database associated with that office. But the idea that Russian military intelligence was planning to hack the voter rolls in American Samoa, an unincorporated U.S. territory with 56,000 inhabitants who can’t even vote in U.S. presidential elections, is plainly risible.
The Mueller Indictment’s Sleight of Hand
The Mueller indictment of GRU officers released on July 13 appeared at first reading to offer new evidence of Russian government responsibility for the hacking of Illinois and other state voter-related websites. A close analysis of the relevant paragraphs, however, confirms the lack of any real intelligence supporting that claim.
Mueller accused two GRU officers of working with unidentified “co-conspirators” on those hacks. But the only alleged evidence linking the GRU to the operators in the hacking incidents is the claim that a GRU official named Anatoly Kovalev and “co-conspirators” deleted search history related to the preparation for the hack after the FBI issued its alert on the hacking identifying the IP address associated with it in August 2016.
A careful reading of the relevant paragraphs shows that the claim is spurious. 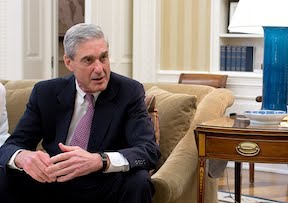 Mueller: Don’t read the fine print. (The White House/Wikimedia)
Searching for website vulnerabilities would be evidence of intent to hack them, of course, but searching Republican Party websites for email addresses is hardly evidence of any hacking plan. And Paragraph 74 states that Kovalev “deleted his search history”—not the search histories of any “co-conspirator”—thus revealing that there were no joint searches and suggesting that the subject Kovalev had searched was Republican Party emails. So any deletion by Kovalev of his search history after the FBI alert would not be evidence of his involvement in the hacking of the Illinois election board website.
With this rhetorical misdirection unraveled, it becomes clear that the repetition in every paragraph of the section of the phrase “Kovalev and his co-conspirators” was aimed at giving the reader the impression the accusation is based on hard intelligence about possible collusion that doesn’t exist.
The Need for Critical Scrutiny of DHS Cyberattack Claims
The DHS campaign to establish its role as the protector of U.S. electoral institutions is not the only case in which that agency has used a devious means to sow fear of Russian cyberattacks.
In December 2016, DHS and the FBI published a long list of IP addresses as indicators of possible Russian cyberattacks. But most of the addresses on the list had no connection with Russian intelligence, as former U.S. government cyber-warfare officer Rob Lee found on close examination.
When someone at the Burlington, Vt., Electric Company spotted one of those IP addresses on one of its computers, the company reported it to DHS. But instead of quietly investigating the address to verify that it was indeed an indicator of Russian intrusion, DHS immediately informed The Washington Post. The result was a sensational story that Russian hackers had penetrated the U.S. power grid. In fact, the IP address in question was merely Yahoo’s email server, as Rob Lee told me, and the computer had not even been connected to the power grid. The threat to the power grid was a tall tale created by a DHS official, which the Post had to embarrassingly retract.
Since May 2017, DHS, in partnership with the FBI, has begun an even more ambitious campaign to focus public attention on what it says are Russian “targeting” and “intrusions” into “major, high value assets that operate components of our Nation’s critical infrastructure”, including energy, nuclear, water, aviation and critical manufacturing sectors.  Any evidence of such an intrusion must be taken seriously by the U.S. government and reported by news media. But in light of the DHS record on alleged threats to election infrastructure and the Burlington power grid, and its well-known ambition to assume leadership over cyber protection, the public interest demands that the news media examine DHS claims about Russian cyber threats far more critically than they have up to now.


Gareth Porter is an independent investigative journalist and winner of the 2012 Gellhorn Prize for journalism. His latest book is Manufactured Crisis: The Untold Story of the Iran Nuclear Scare.
Posted by Chuck Spinney at 5:40 PM