Neo-Imperialism and the Arrogance of Ignorance

Most Americans do not realize the extent to which the U.S. is becoming involved militarily in the welter of conflicts throughout Saharan and sub-Saharan Africa (check out the chaos as mapped here).
Although recent reports have tended to focus on the French effort to kick Al Qaeda in Islamic Maghreb (AQIM) out of Mali — an effort that may now be devolving into a far more complex guerrilla war, that French operation is just one operation in what may be shaping up to be a 21st Century version of the 19th Century Scramble for the resources of Africa. It’s a policy that, from the U.S. point of view, may not be unrelated to the pivot to China,  given China‘s growing market and aid presence in Africa.  Together, the scramble and the pivot will be sufficient to offset the near term effect of an sequester in the Pentagon with a torrent of money flows in the future.
Last year, Craig Whitlock of the Washington Post provided a mosaic of glimpses into the widespread U.S. involvement in Africa.  He authored a series of excellent reports, including here, here and here.  The map below is my rendering of the basing information in Whitlock’s report (and others), as well as the relationship between that basing information to distribution of Muslim populations in central Africa. Consider the distances involved in this swath of bases loosely portrayed by the red dots: the distance between these bases along the axis from northwest to southwest on the African continent alone is greater that the distance from New York to Los Angeles.  Think of the ethnic and tribal differences between Burkina Faso and Kenya, not to mention the differences within those countries!  And remember, virtually all of North Africa, from Morocco to Egypt is over 90% Muslim. 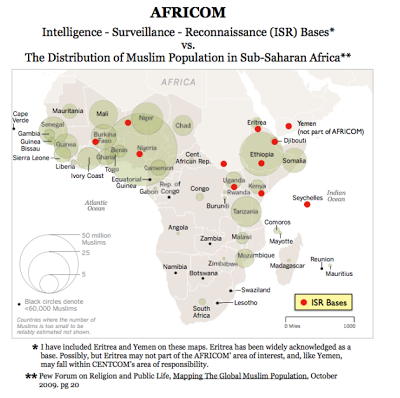