Flush With Cash, Running on Empty (I)

The High Cost of the Military Technical Revolution

One of the never ending claims made by proponents of the military technical revolution is that emerging complex weapons technologies create more combat power per unit of labor — that we are substituting capital for labor and technology-intensive capital goods are the key America’s competitive advantage, given America’s high cost labor.  This claim is bullshit pumped out by a sound-byte addicted Military - Industrial - Congressional Complex.
For readers who think my rhetoric excessive, consider please the following  series of graphics.  That the revolution in military affairs (RMA) continues with increasing intensity despite such evidence to the contrary, and without substantive critical debate, says a lot about the dominant values in Versailles on the Potomac.
If the claim made by the RMA evangelicals were true, then a percentage reduction in the size of combat forces would be accompanied by a greater percentage savings in defense budgets. But as this table shows, huge reductions in force size (ranging from 56% to 69%) from the spending peak of the Vietnam War (1968) to the spending peak of the so-called Global War on Terror or GWOT (2010) have been accompanied by a 34% increase in the defense budget, after removing the effects of inflation (using DoD deflators which are biased to reduce the size of this disconnect). 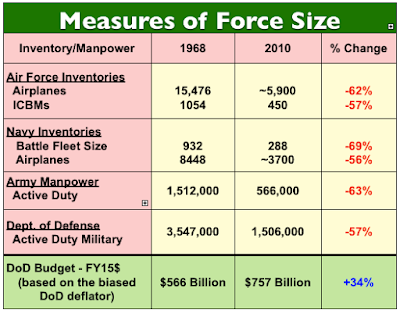 Yet, as the next figure shows, compared to Vietnam, the GWOT is a tiny war, when compared in terms of troops deployed or operational tempos (e.g., total attack sorties). 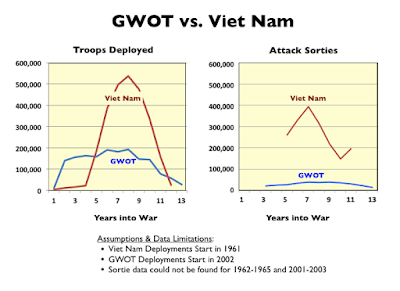 Moreover, despite the GWOT's small size and low operating tempos, the next figure shows that, after removing the effects of inflation, the  GWOT is already by far the second most expensive war in U.S. history going back to the American Revolution — it already exceeds the cost of Viet Nam by a factor of 2, and because the GWOT has mutated into perpetual war, there is no end in sight, and like Viet Nam, there is also no light at the end of the GWOT’s victory tunnel. 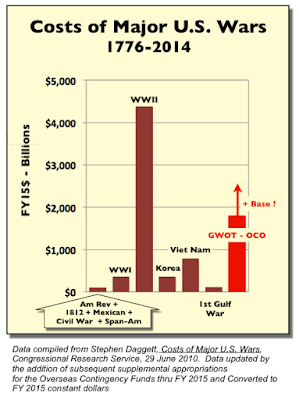 The net result of  the economic impact of the ongoing military-technical revolution can be seen in the next figure, which places President Obama’s current budget plan in a historical perspective in both current dollars and two estimates of inflation adjusted dollars (the first assumes that inflation affects the Pentagon in the same way as it effects the entire economy and the second uses the Pentagon’s biased inflation index which conveniently makes current budgets look like a far smaller departure from past budgets): 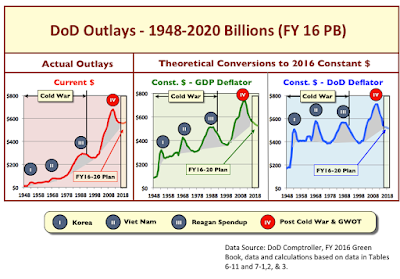 One would think the end of a Cold War with a nuclear-armed superpower and the massive force structure reductions that have taken place over the long term would have some effect on the pattern of boom-bust Pentagon spending dynamics — but they did not, except to raise both the ceiling of the boom phase and the floor of the bust phase.
The bottom line should be clear to even the most casual observer:  The claim that the ongoing military-technical revolution reduces costs by substituting capital for labor is fact-free claptrap.  Moreover the hype about this military-technical revolution, which has became ever more hysterical since the mid-to-late 1980s, has been accompanied by a dramatic worsening of the mismatch been promises and reality.

Perhaps the apotheosis of the cost and labor saving dimensions of the military-technical revolution has been the evangelical rhetoric surrounding the use of “labour saving” unmanned airplanes — drones — in the GWOT. I urge readers in denial about my bottom line to carefully study How America Broke Its Drone Force by David Axe in the Daily Beast (attached below for your reading convenience).  Axe describes how the high cost of labor-intensive drone operations has broken the back of the drone force to such a point that it had to cut back operating tempos in the face of the increasing intensity of the offensive campaign waged by ISIS.

Bear in mind, the pathetic misery in the drone force described by Axe coincides with Era IV of the boom bust cycle in the preceding chart of Defense Spending.

Posted by Chuck Spinney at 7:44 AM