See also this excellent remembrance by my friend and long time Pentagon watcher Andrew Cockburn in Counterpunch.
FEBRUARY 6, 2019
Ernie Fitzgerald: the Man Who Waged Bureaucratic Warfare on the Pentagon
by ANDREW COCKBURN, Counterpunch, 6 February 2019
Ernie Fitzgerald, who died on January 31, always tried to be optimistic.  “That’s where the Joint Chiefs will make their last stand when the taxpayers finally storm the building,” he would say, pointing to the hot dog stand at the center of the Pentagon’s inner greensward.  The Chiefs would have richer territory to defend today – hot dogs have given way to an Au Bon Pain eatery, and defense spending has soared to heights even beyond the levels decried, and whenever possible sabotaged, by Ernie as he waged bureaucratic warfare from his guerrilla headquarters on the fifth floor.
That was long after he had been sacked from his position as a senior air force cost management official on the direct orders of Richard Nixon (“get rid of that son of a bitch”) for testifying to congress that the air force was facing, accepting, and concealing a $2 billion cost overrun on the C-5A transport plane being built by Lockheed.  Ernie sued Nixon and the cronies involved in the illegal firing, fought the case all the way to the supreme court, won his job back, sued again when the air force nevertheless refused him proper exercise of his responsibilities, and won again.
Even though the air force did its best to keep him well away from further official probes of major contractors’ larcenous operations, Ernie nevertheless not only inspired fellow whistleblowers and helped organize an effectiv system for promoting their revelations, but also, being a propagandist of genius, instilled in the public mind a perception of defense spending as systemized rip-off.
The inspiration benefited not only whistleblowers – he called it “committing truth” – but also journalists, as I can attest, having been the recipient of countless calls that invariably began with “this is o-o-ld Fitzgerald” in his beautifully modulated Alabama drawl.  But beyond such direct contacts, Ernie conceived and encouraged an organization, The Project on Military Procurement to broadcast revelations of Pentagon malfeasance while protecting the leaker, often via the cover of his potent contacts on Capitol Hill.  The Project subsequently evolved into the ongoing and potent Project on Government Oversight.
Ernie’s particular stroke of promotional insight was that, though the public’s eyes may glaze over when informed that some weapons system or other was costing billions more than initially advertised, they would readily understand the fraud of a toilet seat priced at $640, or a $435 hammer, obscenities that he unearthed and publicized, and that generated the appropriate outrage.  His hope was that such examples would lead to the understanding that grotesquely overpriced bombers and missiles were simply collections of such spare parts “flying in close formation.”
More fundamentally, Ernie’s experiences in the Pentagon weapons-buying culture lead him to the essential truth that outrageous weapons costs are not merely manifestations of corruption or incompetence, but actual official policy.  In his terrific books, High Priests of Waste and The Pentagonists (he wrote as well as he talked) he laid out an ironclad case for this proposition, including unguarded admissions by high officials such as Dr. Eugene Fubini, in his time a hugely influential Pentagon advocate for hi-tech (and invariably hugely expensive) weaponry, who stated publicly that defense spending could never be cut because “We have an arsenal economy, and we just can’t change it without violent dislocation.” Air Force General “Zeke” Zoekler went so far as to explain, in response to Ernie’s efforts to curb costly inefficiencies in a vast program supervised by the general, that so far as defense procurement was concerned, “inefficiency is national policy” necessary for the attainment of “social goals.”
Given that politicians and the universe of public opinion manipulators readily accept and tout this notion, regardless of whether we are thereby provided with an effective defense, or whether there is any threat against which we need to defend, it is hardly surprising that the military-industrial-complex enjoys almost unchallenged political power, a fact that Ernie well understood.  As he remarked to me in the aftermath of the 1980 election, in which both parties had held out promises of rivers of gold to the military in hopes of endorsement by the MIC, “The Joint Chiefs just auctioned off the presidency from the battlements of the Pentagon.”  Today’s world, in which our president’s agenda, generally marked by rapine and pillage, has proceeded almost without effective challenge except when he contemplated cutting the defense budget (Trump’s effort to cut it to $700 billion from the 2020 tab was almost immediately quashed) or halting foreign military engagements  (necessary excuses for budget nourishment) bely Ernie’s optimism regarding an eventual taxpayer revolt.  But he never gave up fighting.  We have lost a great patriot.
More articles by:ANDREW COCKBURN
Andrew Cockburn is the Washington editor of Harper’s Magazine.  An Irishman, he has covered national security topics in this country for many years.  In addition to publishing numerous books, he co-produced the 1997 feature film The Peacemaker and the 2009 documentary on the financial crisis American Casino.  His latest book is Kill Chain: The Rise of the High-Tech Assassins (Henry Holt).
Posted by Chuck Spinney at 4:03 PM

My long time friend and colleague, the legendary A. Ernest Fitzgerald (AF bio), passed away a few days ago at the age of 92 after a long illness.

Being around people like Ernie Fitzgerald was one of the main reasons I loved working in the Pentagon. Most people working in the Department of Defense go along to get along;  and while a majority (certainly not all) are patriotic, intelligent, and hard working … they are also boring.  But there is something about military institutions that attracts a very few fun-loving, brilliant mavericks who love to throw rocks at the institutional boat, particularly when it is in the interest of committing truth and doing what they believe to be right in the face of incompetence or corruption or both — and all institutions that spend other people’s money, like the DoD, are prone to both incompetence and corruption.  These mavericks have the same virtues as the majority — but they are definitely not boring, and they possess something else: an inner drive that is very rare.  Their numbers are few, because military institutions hate them, view them as being certifiably crazy, and go overboard to expel them.  On the other hand, these institutions need their “crazies” to stay healthy and vibrant.  The late Ernie Fitzgerald was one of the most precious of the “crazies” — and he beat the expulsion game in a truly amazing way.
I first heard about Fitzgerald at the very beginning of my career in November 1968, when he testified — or in his words, “Committed truth” — to Senator Proxmire’s Joint Economics Committee on the huge cost overrun on the C-5A transport.  At that time I was a 2nd Lt buried in the Flight Dynamics Laboratory at Wright-Patterson AFB, and congressional hearings were distant abstract affairs.  But the newspaper reports of his testimony were electrifying.  Moreover, they struck home; I had been hearing horror stories about the C-5, particularly its landing gear, for almost a year from one of my closest friends, also a 2nd Lt, who worked in the C-5 program office, which was just down the street from my office.  My reaction was — Thank God, at least someone in DC has their head screwed on and is finally telling the truth about this piece of crap!  Ernie immediately became a hero to both my friend and me.
I finally met Ernie 10 years later, when I was a civilian working in the Pentagon.  Ernie had been fired by the Air Force, but the expulsion failed spectacularly.  The AF was forced to rehire him, together with back pay, via a law suit that made it all the way to the Supreme Court together with some reckless statements about firing him by President Nixon that were discovered on the Watergate tapes.  Ernie had become world famous, not least because, in his spare time, he also penned the High Priests of Waste, a best selling book about his adventures in the Pentagon and the underlying causes of cost overruns.

This book is now a classic, because Ernie was much more than a whistle blower; he was a brilliant industrial engineer who understood the pathological nature of manufacturing and contracting in the Military-Industrial-Congressional Complex.  His timeless book should be mandatory reading still for anyone involved in the design and purchasing of weapons by the DoD.  Despite his fame, Ernie was in not in the least bit pretentious.  Quite the contrary, his twinkling eyes, infectious smile, and his deep Alabama accent were accompanied by a wonderful sense of humor that would have everyone (except the generals) rolling in the aisles with laughter.  We became fast friends over the following years.
Most of all, Ernie, the happy warrior, loved launching the V-2s in his righteous war against blatant government waste.  Everyone has heard about the $640 toilet seat and the $436 hammer, but many people do not realize that the thousands of newspaper reports about these outrages had their origin directly or indirectly in the anti waste campaign Ernie launched in the early days of Ronald Reagan's spending spree.  Without Ernie, there would have been no spare parts “horrors.” 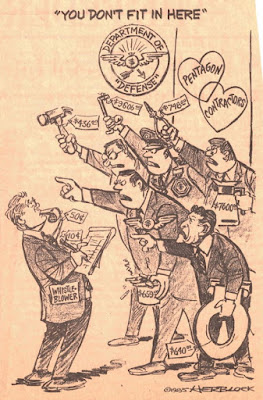 In the early 1980s, Ernie, with his characteristic down-home humor, described to me the strategic goal of his spare parts crusade by saying (and this is almost a direct quote):
“Chuck, you have to understand, an average person cannot relate to the overpricing of an airplane like the F-15 fighter or B-1 bomber or an M-1 tank, so first, we have to explain how the Pentagon’s overpricing scam works in terms of things they are familiar with, like toilet seats, hammers, screws, ash trays, etc.  Then, step 2 is simply to explain how an F-15 or B-1 bomber or M-1 is simply a bundle of overpriced spare parts flying in close formation.” 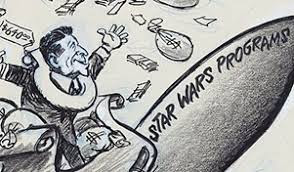 The great Washington Post cartoonist, Herblock, was one of the very few observers who instinctively understood Ernie’s game plan, and he did some of his best work highlighting the connection between Steps I and 2.
That Step 2 of Ernie’s strategy did not play out as he hoped is no reflection on him.  With a few exceptions, like Herblock, Step 2 was a mental 'bridge too far' for the crass publicity seeking predilections of the press-politician lash-up in the contemporary American Deep State.
Long-time defense reporter Mark Thompson has written a great tribute to Ernie's career that can viewed at this link.

Ernie was a great friend and an exemplar to anyone aspiring to a career in the Department of Defense.  I shall miss him.
Posted by Chuck Spinney at 1:39 PM