Why the Neoconmen are Pivoting to Hillary Clinton

Yesterday, sixty self-proclaimed  members of the "Republican national security community," including many prominent necons  portentously signed an open letter to the GOP and the world calling on the GOP to dump Donald Trump or else they would work "energetically" to prevent the election of that GOP candidate for president -- a not so subtle threat that they would support Hillary Clinton for President, a position that ought to give pause to those antiwar Democrats supporting Hillary Clinton.
My friend Daniel McAdams, Executive Director of the Ron Paul Institute, explains below why the War Party is running from Trump and pivoting toward Hillary Clinton.  Clearly, the neoconmen view Trump as a loose cannon and potential a serious threat to their permanent war machine.
Attached herewith is McAdams' analysis; the "open letter" is attached beneath it.
Chuck Spinney
NEOCON WATCH
Panicked Neocon Armchair Warhawks Penning Harshly-Worded Letter on Trump Foreign Policy
Daniel Mcadams, Ron Paul Institute for Peace and Prosperity, March 2, 2016
http://www.ronpaulinstitute.org/archives/neocon-watch/2016/march/02/panicked-neocon-armchair-warhawks-penning-harshly-worded-letter-on-trump-foreign-policy/ 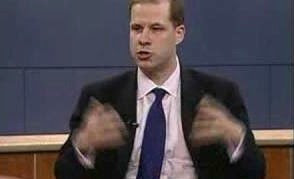 Neocon Max Boot's nervous breakdown...
The neocons are renowned for their courage on the battlefield. There is no keyboard they are afraid to finger. No pen they won't commandeer. When the battle cry is sounded, they unhesitatingly push the "on" button at their computers and saddle up for battle. Off with the loafers and under the desk! "Caution to the wind! Bring in a wine spritzer, dammit, I'm off to waaar!"
While this Institute and this column most definitely do not take a position on any candidate and in fact your correspondent views voting itself with disdain in today's corrupt US political system, it is impossible to avoid viewing with extreme amusement the collective neocon hysterical breakdown over the possibility that voters of the Republican Party -- a party neocons crashed en masse starting in 1972 and especially 1976 -- may be sending as their nominee for president a man who has committed the cardinal sins of:
1) Stating the obvious that the Iraq war was brought to us by the liars of the neoconservative movement and has been a total disaster for the rest of us who are forced to pay for their fantasies of world domination.
2) Suggesting that he might actually speak with Russian President Vladimir Putin to see if US/Russia differences can be worked out without a potentially world-ending nuclear war.
3) Though arguing that he is hugely pro-Israel, nevertheless suggesting that if the US is to play a role in the Israel/Palestine issue (this Institute would argue that it should not), the US side should, in the interests of any chance of success, take a neutral role in the process.
4) Wondering why on earth Obama listened to idiotic neocon advice and overthrew Libya's strongman leader only to see the red carpet laid down for ISIS.
5) Suggesting that it may be a good thing that Russia be bombing ISIS into oblivion and that we might want to just sit back and let that happen for once.
These positions are mortal sins in the Church of the Neoconservative and the only penance is an intense round of Stalinist self-criticism and ultimately political exile because one is never trustworthy again once one violates the neocon commandments. There is no purgatorio in the neocon Inferno.
So in Politico today, Michael Crowley writes that the "Neocons Declare War on Trump." How do they propose to prosecute their war? As usual, with their well-known bravery. They are planning a mass exodus from the Republican Party to support their sister-in-arms Hillary Clinton, who as president plans to change the official motto of the United States from "In God We Trust" to "We Came, We Saw, He Died."
Tomorrow the neocons plan to launch their version of a nuclear missile -- the dreaded "strongly-worded letter" -- to warn Republican voters that if they continue to flirt with the foreign policy apostate Trump, the neocons will take their toys and go home to the Democratic Party. Republican voters at that point are supposed to wail and gnash their teeth at the prospect of supporting a party without bloodsucking neocons calling the shots.
Leading the strongly-worded letter campaign is Dov Zakheim, who as George W. Bush's Comptroller of the Pentagon somehow lost track of a trillion or so dollars. It's a safe bet Zakheim is not spending his retirement from government service in a double-wide trailer somewhere. Top military officers will retire, screams Zakheim, if under Trump the US abandons the neocon vision of "American exceptionalism." Perhaps so. And what would they do without enormously well-paid positions in the military-industrial complex to retire to?
The neocons are gambling that the American voter's fury at Washington does not extend to their foreign policy adventurism. They are gambling that another PNAC-style harshly-worded letter will awaken America from its temporary dalliance and shock it back into its abusive relationship with the soft-skinned and well-perfumed keyboard warriors who eagerly send America's sons and daughters to be slaughtered in wars that achieve nothing but the ascendence of new "bad guys" used to justify ever-more wars. And all of it pays very nicely for them.
Will voters again try to kick that football? Or will they kick the neocons instead?
Copyright © 2016 by RonPaul Institute. Permission to reprint in whole or in part is gladly granted, provided full credit and a live link are given

------[Attachment]------
OPEN LETTER ON DONALD TRUMP FROM GOP NATIONAL SECURITY LEADERS
WOTR STAFF, War on the Rocks, MARCH 2, 2016
http://warontherocks.com/2016/03/open-letter-on-donald-trump-from-gop-national-security-leaders/
We the undersigned, members of the Republican national security community, represent a broad spectrum of opinion on America’s role in the world and what is necessary to keep us safe and prosperous. We have disagreed with one another on many issues, including the Iraq war and intervention in Syria. But we are united in our opposition to a Donald Trump presidency. Recognizing as we do, the conditions in American politics that have contributed to his popularity, we nonetheless are obligated to state our core objections clearly:
His vision of American influence and power in the world is wildly inconsistent and unmoored in principle. He swings from isolationism to military adventurism within the space of one sentence.
His advocacy for aggressively waging trade wars is a recipe for economic disaster in a globally connected world.
His embrace of the expansive use of torture is inexcusable.
His hateful, anti-Muslim rhetoric undercuts the seriousness of combatting Islamic radicalism by alienating partners in the Islamic world making significant contributions to the effort. Furthermore, it endangers the safety and Constitutionally guaranteed freedoms of American Muslims.
Controlling our border and preventing illegal immigration is a serious issue, but his insistence that Mexico will fund a wall on the southern border inflames unhelpful passions, and rests on an utter misreading of, and contempt for, our southern neighbor.
Similarly, his insistence that close allies such as Japan must pay vast sums for protection is the sentiment of a racketeer, not the leader of the alliances that have served us so well since World War II.
His admiration for foreign dictators such as Vladimir Putin is unacceptable for the leader of the world’s greatest democracy.
He is fundamentally dishonest. Evidence of this includes his attempts to deny positions he has unquestionably taken in the past, including on the 2003 Iraq war and the 2011 Libyan conflict. We accept that views evolve over time, but this is simply misrepresentation.
His equation of business acumen with foreign policy experience is false. Not all lethal conflicts can be resolved as a real estate deal might, and there is no recourse to bankruptcy court in international affairs.
Mr. Trump’s own statements lead us to conclude that as president, he would use the authority of his office to act in ways that make America less safe, and which would diminish our standing in the world. Furthermore, his expansive view of how presidential power should be wielded against his detractors poses a distinct threat to civil liberty in the United States. Therefore, as committed and loyal Republicans, we are unable to support a Party ticket with Mr. Trump at its head. We commit ourselves to working energetically to prevent the election of someone so utterly unfitted to the office.

The statement above was coordinated by Dr. Eliot A. Cohen, former Counselor of the Department of State (2007–8) and Bryan McGrath, Managing Director of The FerryBridge Group, a defense consultancy. They encourage other members of the Republican foreign policy and national security communities wishing to sign the declaration to contact them
Posted by Chuck Spinney at 2:55 PM