Attached herewith is the Marshall Fund's roadmap so you don’t get lost: 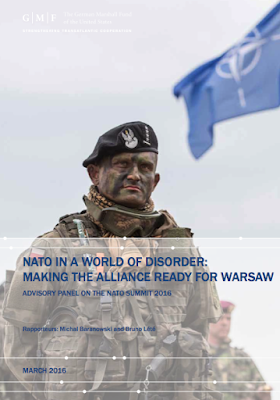 “To successfully adapt NATO to a rapidly changing security environment, the Warsaw Summit should consider the following recommendations in its overall assessment:
• Place two rotating brigades on NATO’s Eastern Flank. Russia has adjusted to NATO’s Readiness Action Plan by implementing an effective anti-access / area-denial strategy from the High North, to the Baltics and the Black Sea. In the Baltics and in Poland, Russian military capabilities are sufficiently advanced to prevent NATO from easily reinforcing its Allies in case of a crisis. The Warsaw Summit must therefore shift Alliance strategy from small, mobile reinforcement to a larger, more autonomous forward presence with key capabilities in air defense, intelligence, surveillance, reconnaissance, and electronic warfare. Considering the overwhelming Russian military force ratio in the region, rotating a force the size of an allied brigade, one in the Baltics and one in Poland, would be a start.
• Develop a more robust role in the South. In Warsaw, NATO can take a number of steps to strengthen its southern posture. First, beyond the tasks in the Aegean, NATO can create a stronger capacity for warning, surveillance, and response against trafficking in the Eastern and Central Mediterranean by deploying Global Hawk RPAs as NATO assets from the Naval Air Station in Sigonella. Second, new initiatives must be created to deter risks to Turkey’s security and territorial integrity, including the growing Russian military presence in the region. Finally, greater political support and resources must be devoted to NATO’s Mediterranean Dialogue and the Istanbul Cooperation Initiative. In general there is substantial — and often unrecognized — openness and willingness in the Arab region for greater cooperation with NATO.
• Increase NATO’s preparedness regarding hybrid threats. Today a majority of NATO member states, if not all, are confronted with new forms of warfare based on criminal or hybrid operations. Strong NATO engagement on non-linear threats is therefore critical because NATO cannot present a united front if certain allies feel inadequately protected in this domain. The Warsaw Summit can set the Alliance on the right path by increasing human capital and financial resources for NATO’s various civil and military intelligence units, by granting the Supreme Allied Commander Europe more powers to authorize some of the preparatory response procedures, and by seeking a NATO-EU Memorandum of Understanding for closer cooperation on hybrid warfare.
• Update NATO’s nuclear policy. The doctrine and conditions for crisis management enshrined in the 2012 Deterrence and Defense Posture Review, plus a number of other basics of the previous nuclear debate, are no longer valid. The Alliance should proceed in two steps. At the Warsaw Summit, Allies should agree on wording that highlights the need for nuclear deterrence against any threat to NATO territory in order to reassure the most exposed member states. After the Summit, NATO should enter into a nuclear debate comparable to the process that led to the 2012 Deterrence and Defence Posture Review, in order to redefine the contribution of NATO’s nuclear forces.
• Revitalize the partnerships and Open Door policy. NATO partnerships and enlargement must be reassessed. The Alliance would see its action radius beyond its borders drastically reduced if it allows many of its partnership connections to wither on the vine; this includes status of force agreements, overflight rights, and intelligence-sharing arrangements.
NATO enlargement must be understood as a political project, and the process cannot be reduced to a negotiation over legal conditionality or technical criteria. Concluding NATO integration in the Balkans should be a priority. Placing the Open Door back at the heart of allied policy will project NATO’s credibility and resolve beyond its borders.” [emphasis added]
To continue Download PDF of Report  -

Now what was it that Bismarck said about the bones of Pomeranian Grenadiers?