Summary of the Refugee Crisis

Attached is a superb summary of the refugee situation that has been midwifed in large part, but not entirely, by the actions of the US and its allies in the so-called Global War On Terror (GWOT).  The author, Patrick Cockburn, is one of the finest reporters now covering events in the Middle East.

Refugee crisis:
Where are all these people coming from and why?
PATRICK COCKBURN, Independent, Tuesday 08 September 2015
http://www.independent.co.uk/news/world/refugee-crisis-where-are-all-these-people-coming-from-and-why-10490425.html
[Reposted with permission of the author]
It is an era of violence in the Middle East and North Africa, with nine civil wars now going on in Islamic countries between Pakistan and Nigeria. This is why there are so many refugees fleeing for their lives. Half of the 23 million population of Syria have been forced from their homes, with four million becoming refugees in other countries.
Some 2.6 million Iraqis have been displaced by Islamic State – Isis – offensives in the last year and squat in tents or half-finished buildings. Unnoticed by the outside world, some 1.5 million people have been displaced in South Sudan since fighting there resumed at the end of 2013.
Other parts of the world, notably south-east Asia, have become more peaceful over the last 50 years or so, but in the vast swathe of territory between the Hindu Kush mountains and the western side of the Sahara, religious, ethnic and separatist conflicts are tearing countries apart. Everywhere states are collapsing, weakening or are under attack; and, in many of these places, extreme Sunni Islamist insurgencies are on the rise which use terror against civilians in order to provoke mass flight.
Another feature of these wars is that none of them show any sign of ending, so people cannot go back to their homes. Most Syrian refugees who fled to Turkey, Lebanon and Jordan in 2011 and 2012, believed the war in Syria would soon be over and they could return. It is only in the last couple of years that they have realised that this is not going to happen and they must seek permanent sanctuary elsewhere. The very length of these wars means immense and irreversible destruction of all means of making a living, so refugees, who at first just sought safety, are also driven by economic necessity. 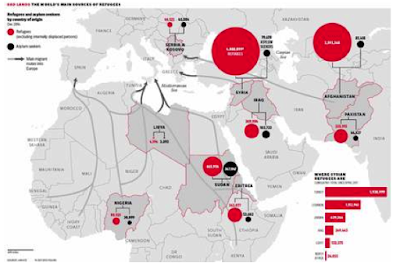 
The mass flight of people will go on as long as the war in Syria and Iraq continues.

Posted by Chuck Spinney at 9:13 AM