by FRANKLIN SPINNEY, Counterpunch, SEPTEMBER 11, 2015
http://www.counterpunch.org/2015/09/11/refugee-flows-a-grand-strategic-weapon-of-mass-destruction/
One could argue that the massive refugee flows triggered primarily by ISIS and al Nusrah, and possibly accelerated by alleged indiscriminate attacks on civilians by the al-Assad regime, have mutated into a powerful grand-strategic weapon of mass destruction. I use the term “grand strategic” advisedly, because it involves more the sustainment of cohesion and morale among our allies and attracting the support of as-yet uncommitted nations around the world than it does defeating military forces on the battlefield. [Interested readers can find my discussion of the nature of grand strategy at this link.]
Whether intentionally or not — and I think intentionally — the tactics and operations of ISIS and al Nusrah (who are supported financially by wealthy Salafis in Saudi Arabia and the Gulf monarchies) have unleashed a wave of terror that has created a flood of refugees in Syria and Iraq.  This refugee crisis is placing the United States, its European allies, and Israel on the horns of a grand-strategic dilemma that promises to become much worse as the cold, rainy winter season approaches.
Our NATO allies, including an increasingly ambivalent Turkey, simply do not have the resources or political will to absorb the millions of desperate people now on the move. The proximate causes of these refugee flows may be the tactics of terror unleashed by Salafi forces, but it is common knowledge that the emergence of ISIS and al Nusrah has been midwifed by America’s interventions and policies in the Middle East — particularly (1) our unprovoked invasion of Iraq in 2003, made without UN authorization and with only limited international support, and (2) by our uncritical support of Israel’s desire to topple the Assad regime in Syria.  Sooner or later, if this humanitarian catastrophe continues to worsen, any remaining empathy held by our allies in Europe and neutral parties around the world for the foreign policy of United States will dissolve into finger pointing, particularly if domestic politics in the US continue to foment war on behalf of Israel, while using the politics of fear to make the US people even more immigration phobic.
Israel’s role in this crisis remains murky but pernicious, with Prime Minister Netanyahu providing verbal if not material support for the overthrow of the Assad Regime by ISIS. Last October, for example, he claimed that Iran is a greater threat than ISIS to both Israel and the world.  Netanyahu is keen to take down the Assad government in Syria, because President Assad is a supporter of Hezbollah and receives support from Iran.  To this end his Likud government has formed a de facto alliance with powerful anti-Shi’a members of the Saudi government and the Gulf States who are also keen to take down Assad and the Shi’a dominated government in Iraq.  Developments in Iraq and Syria are working to reinforce the Saudi’s long standing fear that Iran’s Shi’a influence will spill over the Shi’a areas of eastern Saudi Arabia, which happen to be where most Saudi Arabia’s oil wealth is located.
Indeed, our so-called Arab Allies in the so-called anti-ISIS war — i.e., Saudi Arabia and the Gulf States — have been complicit in financing the rise of ISIS, although by mostly unofficial means such as “charitable” donations.  By extension, they are also complicit in the unleashing of the ISIS terror in Syria, which spilled over to threaten the Shi’a dominated government of Iraq.  Moreover, these conservative Sunni monarchies are already overburdened demographically with immigrants imported to do menial work, and they have Shi’a related minority problems.  In other words, they lack both the capacity as well as any desire to absorb a significant part of the flood of impoverished refugees their policies helped to create.  That leaves Jordan, already overloaded with Palestinian refugees, trapped in the middle, between the Jihadis triggering the flood and an increasingly intolerant Israel.
Where will this refugee crisis end?
We need only to place it in the context of the long festering problem of Palestinian refugees to realize how the new flood of more than 4 million additional refugees will overwhelm any hope for stability in the Arab lands of the Middle East.
Once again, Israel is at the center of the matter.
As the civil rights activist and concentration camp surviver Israel Shahak explained in 1982, the state of Israel, with American acquiescence if not cooperation, has long sought to break up the Arab world into non-cooperative, squabbling, or warring tribal factions. Given the history of implacable hostility by the governments of Syria and Iraq towards the existence of a Jewish state on Arab land, such a neocolonial divide-and-conquer attitude might be understandable in conventional nation versus nation conflicts.  But as the rise of ISIS and al Nusrah have shown, it is now dangerously out of date, given the nature of global communications and non state actors.   Pro-Israeli American neocons, who promoted the invasion of Iraq and the toppling of the Assad regime, may well think that Israel is the prime strategic beneficiary of the breakup of Iraq and Syria.  However, the reality is that Israel is now faced with the spectre of horrendous and unending blowback over the long term at the more decisive grand strategic level of conflict.
To see the outlines of this looming spectre, one needs only to consider the fate and implications of the Palestinian question.
The UNRA reports that, in addition to the 2 million Palestinian refugees living in camps in Gaza and in the West Bank, there are almost 3 million Palestinian refugees living in squalid refugee camps in Arab nations bordering on Israel, including 449,000 in Lebanon, 499,000 in Syria, and over 2,000,000 in Jordan.  These people are mostly descendants of the 700,000 original refugees created by the 1948 War and who, for one reason or another, have not been absorbed as citizens of other countries.  This map depicts the distribution of these refugee camps. 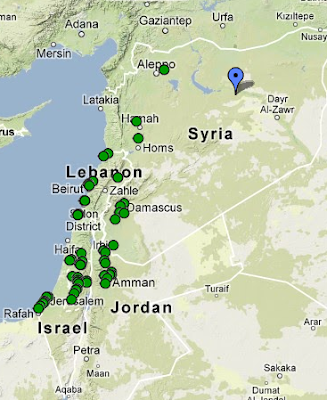 The flood of four million Syrian refugees triggered by ISIS, perhaps with strategic foresight, includes and may well be augmented by a flood of desperate stateless Palestinians pouring out of squalid refugee camps in Syria into Lebanon and into Jordan.  But both nations are already overwhelmed by Palestinian refugees.  Such a flood is likely to destabilize Jordan, heretofore a zone of relative stability, thereby expanding the war and the accompanying humanitarian crisis.  A crisis in an overburdened Jordan might even trigger a flood of Palestinians toward the Palestinian areas of Israel, for the simple reason that there is nowhere else for Palestinians to go.  But this would intensify what Israelis like call “the demographic threat” and might well precipitate a slaughter by panicky self righteous Israelis claiming their god given right to the former Palestinian lands of the West Bank.
There are already early warning signs of such a development. The President of the Palestinian Authority, Mahmoud Abbas, has already asked the United Nations, the European Union and other players to pressure Israel to allow Palestinian refugees fleeing ISIS into Palestinian areas of the West Bank.
Meanwhile, Israeli Prime Minister Benjamin Netanyahu may be walking into a grand strategic trap set either deliberately or inadvertently by ISIS.  He just declared he will not allow Israel to be “submerged” by refugees, claiming that Israel must control its borders (meaning the borders of the occupied West Bank), because Israel is small country, “without demographic or geographic depth.” He announced that Israel would react to this threat by building yet another fence, this time along the Lower Jordan River to prevent those desperate Palestinians spilling out of the squalid refugee camps in Syria and into Jordan from leaking across the Lower Jordan into what is left of the Palestinian areas of the West Bank. The new fence would be in addition to the 240 km fence along the Egyptian border, the fence along the Syrian border in the Golan Heights, and the grotesquely twisting wall winding its way around illegal settlements in the West Bank.  This latest fencing scheme will, in effect turn Israel into a giant self-imposed ghetto, surrounded on three sides by a sea of festering human misery, with Gaza and Areas A and B of the West Bank being sealed off ghettos of festering misery inside the larger Israeli ghetto.  Given Israel’s unquestioned military superiority, such an inhuman arrangement may be enforced with increasing brutality into the medium term, but there is no way such a blight on humanity can end well for Israel.  Netanyahu is turning Osama’s vision of Israel as an isolated Crusader State immersed in a sea of hostility into a reality.
Ironically, there may be only one country left in the neighborhood with a grand strategic interest in de-powering the crisis created by ISIS and its Salafi allies with a possibility, albeit a remote one, of placing the evolution of human conditions in the Middle East onto a healthier pathway.
That nation is Iran, as ace investigative reporter Gareth Porter explains in a very important essay in the Middle East Eye, which I urge readers to study carefully.  While Porter does not address the specific refugee issues highlighted above, he explains (1) the reasons why US and Iran are on a convergent grand strategic pathway in the Middle East; and (2), how domestic politics in the U.S., particularly those of (a) the Israeli lobby and (b) the political economy of the Military – Industrial – Congressional Complex, to which I would add (c) the political economy of the American oil industry are combining to trump any movement toward a constructive modus vivendi with Iran.


Such a rapprochement, if carefully explored in the spirit of the foreign policy enunciated by John Quincy Adams in 1821, may be a necessary if not sufficient condition underpinning any sensible grand strategy for extricating the United States from the no-win quagmire it has created for itself by its short-sighted meddling in the Middle East. Otherwise, as Adams prophetically warned,  if America continues intervening abroad “in search of monsters to destroy,” America will end up trying to be … “the dictatress of the world. [but] She would be no longer the ruler of her own spirit…”
Posted by Chuck Spinney at 12:44 PM