Exclusive: Donald Trump’s ascension to the Republican presidential nomination was predictable, paved by years of right-wing fear-mongering and dissemination of anti-knowledge, says former GOP congressional staffer Mike Lofgren.
By Mike Lofgren, Consortium News, May 12, 2016
https://consortiumnews.com/2016/05/12/donald-trumps-unsurprising-surprise/
{Additional background information describing Mike's important corpus of work can be found at this link}
A lot of pundits have egg on their faces. Nate Cohn recently issued a mea culpa in the New York Times confessing his underestimation of Donald Trump. The Washington Post’s Dana Milbank has even had to make good on his bet that he would literally eat his words if the real estate mogul were nominated.
As late as September 2015, esteemed numbers whiz Nate Silver was telling us that Trump had a 5 percent chance of winning the Republican nomination. Déjà vu: as with the awful consequences of invading Iraq or selling no-documentation mortgages to indigent homebuyers, most of our designated experts didn’t see it coming.

Republican presidential candidate Donald Trump in an MSNBC interview.
My experience with GOP politics was a bit more up-close and personal than that of most pundits. For 28 years, I worked on Capitol Hill as a Republican staffer. The 2008 selection of Alaska Gov. Sarah Palin as vice presidential candidate was embarrassing enough to me, but once the congressional GOP appeared eager to drive the country into a debt default in 2011, I decided to leave and become a political independent.
By that point it seemed plausible to me that Trump – or someone similar – was likely if not inevitable. Although conservative ideologues denounce him for being doctrinally impure, he is the logical culmination of deeper psychological trends both in the party and the broader American culture that I have observed over the years.
Since the demise of the Fairness Doctrine in 1987, the Conservative Media-Entertainment Complex – Rush Limbaugh, Fox News, and all the rest – has poisoned the well of civic engagement with rancor, scapegoating and pessimism about the state of the nation. These self-styled super-patriots seem to get a thrill from talking down the country, and if you add up all the groups they condemn, their targets probably constitute a majority of the U.S. population.
This cultural pessimism was an ingredient in the makeup of fascist movements during the Twentieth Century: enemies are at our borders; the deadliest enemy is within; the nation will collapse if we don’t purge subversive elements.
As film maker Jen Senko has documented, a steady diet of Fox News alarmism can make viewers angry, paranoid and irrational. With that kind of conditioning, is it any wonder that many Republicans are susceptible to Trump’s description of the world’s foremost economic and military power – us – as “weak” and “pathetic?”
Deliberate Obstruction
A related cause of Trump’s rise is the GOP’s political strategy, which only deepens the pessimism that Republican media have fanned. Gridlock, filibusters, government shutdowns, playing chicken with the debt limit: they all reinforce the belief that the country is ungovernable.
A senior Republican Capitol Hill staffer once explained to me – approvingly – that it was a conscious strategy to create gridlock and lower the public approval of Congress. These alleged worshippers of the Constitution would cripple and discredit the branch of government that is the first and arguably premier institution listed in that document. 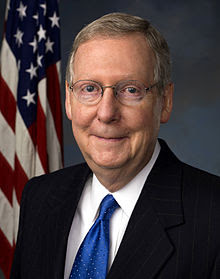 Senate Majority Leader Mitch McConnell, R-Kentucky.
Republicans have attempted to repeal Obamacare 62 times, but for the last six years we have been waiting in vain for the Republican health care plan to replace it. When they do not have undisputed control of government (and we have seen the fiscal and human disasters unleashed when they have dominated Kansas, Louisiana, and Michigan), the GOP is determined to seize up the gears.
Abraham Lincoln’s accusation against the antebellum slavocracy applies: “Your purpose, then, plainly stated, is that you will destroy the Government . . . You will rule or ruin in all events.”
If this is the new politics-as-usual, who can blame people for supporting an imperious outsider who promises to break the deadlock by knocking heads together? Trumpism was brewed in the kitchen of Mitch McConnell, the senator who vowed to derail Obama’s presidency.
I have written before about the GOP’s contribution to anti-knowledge in our society. As Nineteenth-Century humorist Josh Billings put it, “The trouble with people is not that they don’t know, but that they know so much that ain’t so.”
Despite three decades of evidence that tax cuts do not pay for themselves, Republican politicians hew to that line with dogmatic persistence. A couple of millennia of history ought to have taught us that invasions of the Middle East are not likely to go well, but the GOP was gung-ho about Iraq and questioned the patriotism of skeptics.
Many in the Republican base believe with a faith that transcends evidence that Obamacare authorizes death panels just as Obama himself is Kenyan born. Under those circumstances, why should it surprise us when Trump promises $12 trillion in tax cuts while eliminating the $19-trillion national debt in eight years, or claims that Ted Cruz’s father was involved in the Kennedy assassination?
Anti-knowledge is virulent in the GOP, but it is a problem in the larger society as well. A study by the journal Science polled on public attitudes about evolution in the United States, 32 European countries, Turkey and Japan; the only country where acceptance of evolution was lower than in ours was Islamic Turkey. States like Louisiana mandate that public schools teach the bogus “controversy” about evolution.
This epistemic closure, whereby facts are a matter of political opinion, threatens not only the country’s future scientific preeminence, but our ability to have rational discussions about public policy. Trump’s rise is a fire bell in the night warning us of a dangerous cultural development.
Fear and Authoritarianism
For the past 15 years, the people who constitute our bipartisan elite consensus – politicians, generals, media personalities, think-tank experts – have been dinning into our heads the message that we must be very afraid of terrorism, despite the fact that we are more likely to die slipping in the bathtub than in a terrorist attack. It has worked.
Voters in the Republican primary in South Carolina, where Trump won in a walk, declared terrorism their foremost concern, eclipsing a low-wage economy, deteriorating living standards leading to an increase in the death rate of GOP voters’ core demographic, and the most expensive and least available health care in the developed world. 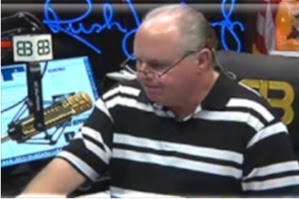 Talk-radio host Rush Limbaugh
The fear that our elite consensus fostered has awakened the latent authoritarianism and paranoia that lurk in all too many ordinary people. This dynamic explains why Trump’s candidacy took off like a moon rocket in November and December of 2015, the period of the terrorist attack in Paris and the murders in San Bernardino.
Government officials and the media whipped up a mood in the country that approached hysteria; Trump deftly exploited it. By being the only politician brazen enough to openly advocate torture – not merely to gain information (a dubious claim), but to inflict pain for its own sake – he tapped into the revenge fantasies of millions of Americans who have been fed a steady diet of fear since 9/11.
We have deluded ourselves that the United States could be a “normal” country while waging a seemingly endless war on terror. We have likewise believed we could carry on with one of our political parties behaving like an apocalyptic cult, along with our public discourse being polluted by bogus “facts” amplified by ferociously partisan media.
Donald Trump is merely a symptom, not the cause, of these troubling cultural markers. His political ascent, then, is really no surprise, as I sensed when I said “goodbye to all that” on Capitol Hill five years ago.


Mike Lofgren is a former congressional staff member who served on both the House and Senate budget committees. His latest book, The Deep State: The Fall of the Constitution and the Rise of a Shadow Government, appeared in January 2016.
Posted by Chuck Spinney at 1:04 PM