The Palestinian Question: Why the Two-State Solution is Kaput.

Water and the Creeping Annexation of the West Bank
Chuck Spinney

***
To exploit the principles of war for our purpose and base ourselves upon (the) strategic indirect approach, so as to determine the issue of the fighting even before fighting has begun, it is necessary to achieve the three following aims:
a. to cut the enemy’s lines of communications, thus paralyzing his physical build-up;
b. to seal him off from his lines of retreat, thus undermining the enemy’s will and destroying his morale;
c. to hit his centers of administration and disrupt his communications, thus severing the link between his brain and limbs.
Reflection on these three aims proves the truth of Napoleon’s saying: ‘The whole secret of the art of war lies in the ability to become the master of the lines of communication.’”
General Yigael Yadin
Chief of the General Staff,
Israeli Forces Journal, September 1949⁠1
1 B.H. Liddell Hart, Strategy, Signet 1974, page 387.

The radical Israeli settlers in the West Bank city of Hebron present what is certainly a candidate for being the ugliest face of Israel’s creeping annexation of the West Bank.   The expansion of settlements in the West Bank and East Jerusalem has reached a point that renders the so-called Two State Solution an impossibility.  General Yadin's comments on the strategy of the indirect approach may have been made in the context of the 1948 Arab Israeli War, but they go a long way toward understanding Israel's strategy for solving its Palestinian Question in the Occupied Territories.
Of course, in Israel’s eyes, the two state solution was never a serious consideration — not even during the heady days of the Oslo Peace Process in the early 1990s.  On 5 October 1995, Israeli Prime Minister Rabin laid out his case for ratifying the Oslo II Accord in a speech to the Knesset.  Rabin described Israel’s goals for the agreement.  He explicitly rejected the idea of a binational state and stated clearly that Israel wanted a permanent solution that would include: (1) a “Palestinian entity” that would be “less than a state,” (2) a “united Jerusalem” as the Israel’s capital, and (3) “blocs of settlements in Judea and Samaria.”
Figure 1 shows that Rabin’s vision is now in place, or as Israeli’s like to say, it is a reality established by ‘facts on the ground.’
The graphic on the left side of Figure 1 depicts the buildup of settlers in the Occupied Territories since the 1967 War. The black line represents the total while the blue line represents the buildup in the West Bank.  The difference between them represents primarily the buildup in East Jerusalem, but it also also includes the twenty thousand or so settlers in the Golan Heights and the settlers in Gaza (before Israel evacuated all 7,800 settlers from Gaza in 2005).
Figure 1
West Bank Settlements: Population Growth and Pattern of Settlement 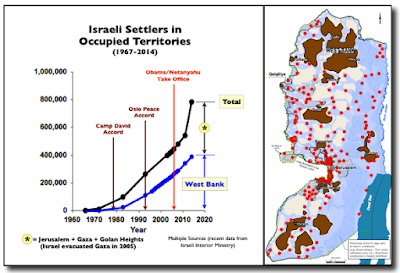 Note of clarification on Figure 1: The number of settlers in East Jerusalem has long been disputed.  On 5 January 2015, Ahuva Balofsky reported in Breaking Israeli News that the Israeli Interior Ministry released data showing that 389,250 Jews living in the West Bank and another 375,000 live in East Jerusalem. These numbers are plotted for 2014 in Figure 1 and they suggest a substantial acceleration in East Jerusalem settlements.  The total numbers for 2014 are roughly consistent with the total released In May 2014 by the Israel’s Construction and Housing Minister Uri Ariel, who said the Jewish population in East Jerusalem was somewhere between 300,000 and 350,0000 and the number of settlers in the West Bank was about 400,000.  Ariel went on to predict that in five years that latter number would increase to as much as 600,000.   So, while there is no doubt that the rate of settlement is accelerating, Figure 1 may exaggerate the appearance of the recent acceleration, because earlier levels for East Jerusalem may have been understated.
The red areas in the map on the right side of Figure 1 depict the settlement locations in the West Bank.  The three areas delineated in the Oslo accords are distinguished by color:
At least seven points are worth noting with regard to Figure 1:  (1) The rate of settlement growth accelerated after the 1979 US-brokered Camp David Agreement.  Camp David not only removed Egypt from the Arab-Israeli Conflict but also resulted in Egypt’s complicity in the maintenance of the Gaza blockade. (2) The US brokered Oslo Accords (triggered by the 1st Intifada) and its US-brokered successors (e.g., the now-forgotten roadmap for peace, triggered by the 2nd Intifada) had no effect on the rate of settler growth in the Occupied Territories. (3) Notwithstanding soaring rhetoric of President Obama’s Cairo speech and his tepid criticisms of Israel’s settlement program, the rate of settler growth accelerated again after President Obama and Prime Minister Netanyahu took office, especially in East Jerusalem, but also in the Area C.
Turning to the right side of the figure: (4) The vast majority of Palestinians now live in Areas A & B (many having migrated into these areas from Area C) and are divided up into separated cantons surrounded by Area C. (5) Israeli settlements, a network of Israeli-only access roads connecting the settlements (not shown) and a system of Palestinian check points controlling entry and exit at the canton boundaries carve up the cantons into disconnected bits and pieces.  (7) Moreover, with the exception of isolated Jericho canton just north of the Dead Sea, all the Palestinian areas are well west of the Jordan border with a network of settlements and the Israeli only access roads as well the Dead Sea separating the Palestinians from the Jordan, the nearest Arab state.  In short, the Palestinian "entity" is cut up into fragments, with each fragment surrounded by Israel.  And that central fact, dear reader, is why Figure 1 is an exemplar how the Yadin strategy fits the occupation like a hand fits a glove.

While the election of Barack Obama as president in 2008 raised the world’s hopes for a more balanced approach to the Palestinian Question, Figure 1 shows Israeli settlements actually accelerated during his Presidency, making a formal Israeli annexation of Area C a likely possibility (as Israel has already done with the Golan Heights of Syria and Jerusalem).  Not only have the Palestinian controlled areas been reduced to an irrational disconnected patchwork that defies any logic for integration into a coherent governable entity, Figure 2 below shows how the pattern of settlements and the Israeli-only roads connecting them have established Israeli control of the West Bank’s water resources. 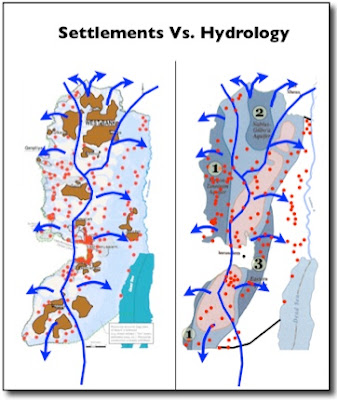 The blue arrows in left side of Figure 2 show the underground flows of water as winter rains are collected in the aquifers under the West Bank and relates this to the pattern of Israeli settlements as the Palestinian areas.  The right side overlays the underground aquifers on this data.  The dark blue regions (labeled 1, 2, and 3) depict the highest quality fresh-water pumping areas.  The light blue areas depict areas of lower quality but viable pumping. The redish-orange areas portray areas of poor pumping.  Israel controls how these different areas are pumped.  This report (also referenced above), describes how this control is exercised. Today, over one-third of Israel’s fresh water budget comes from the aquifers under the West Bank’s highlands. In so doing, Israel (including its settlements) consumes more than 80% of the annual recharge of these aquifers, leaving only 20% for the Palestinians.  (Readers interested in the water question will find a more detailed analysis at this link.)
The United States has been culpable in Israel’s colonization of the West Bank — not only by acquiescing to the creeping annexation depicted in Figures 1 and 2, but also in the financing of Israel's efforts.  This brings us back to Hebron.  The report, Why is Goldman Sachs funding the violent, racist Jewish settlers in Hebron, in one of Israel’s most prestigious newspapers, Ha’aretz, is the tip of a funding iceberg of American funding of illegal settlements — e.g., see Ha’aretz’s  7 December 2015 special report here.
Ha’aretz just reported that President Obama is proposing to prop up Israel with a $40 billion military aid package over the next 10 years, including $3.7 billion this first year, then increasing steadily over the 10 years of the plan.  Israel is not happy with this offer, because President Obama has added a condition to this offer: Israel must promise not to lobby Congress for any additional aid during the decade that the deal is in force.  The Ha’aretz report is silent on any condition to roll back or restrict the rate of growth of settlement activity.


With the possible exception of Bernie Sanders, American complicity in Israel’s solution Palestinian question is not at issue in current presidential election.  This can be seen in the obsequious speeches to the recent AIPAC conference made by all the other candidates.  [See Consortiumnews.com’s “The Clinton/Trump AIPAC ‘Pander-Off’” and “Groveling Before AIPAC.”]
So Israel’s creeping annexation of the West Bank and its lock of the West Bank’s water resources will continue unabated, in part financed by tax deductible donations from the US, and propped up by increased military aid.