It is cliché that the military is a place for unimaginative people who like to follow orders, as well as morally challenged ambitious careerists who view “service” in the military as a ladder to status, fame, and wealth.  And it is indeed true that military institutions have a primitive attraction for these kinds of unsavory personalities.  It is also true that the military attracts larger numbers of well intentioned individuals who are motivated by a sense of patriotism and service but have a predilection toward conformity.  These are popular caricatures, and there is accuracy in them
But there is more.  There is something about the nature of military institutions that attracts a small minority of brilliant eccentrics and individualists who are driven by a desire to do something as opposed to being somebody.  They walk to the beat of their own drummer and there is no exact parallel in the private sector.
Of course, those prone to doctrinaire thinking always make up the majority, and the careerists at the top of the greasy pole of blind ambition view these few eccentrics as crazy lunatics, as royal pains in the ass, and most importantly, as threats who should be purged from the bureaucratic system, lest they poison the impressionable minds of younger officers and enlisted men.  But to my thinking, these eccentrics are the creative jewels in the military’s crown, as well as being a joy to be around, and I think the degree of begrudging tolerance for the small number of eccentric geniuses is a little-examined indicator of the vitality of any military institution.
With the possible exception of the Marine Corps, that tolerance has been steadily extinguished in US Department of Defense since the end of the Vietnam War.  This is particularly true for the US Air Force, where at least one general recently equated dissent from the AF party line (regarding the controversial AF decision to scrap the highly effective A-10 in favor of the far higher cost, problem-plagued F-35) as “treason.”
This brings me to the memory of Colonel Everest Riccioni who died in April at the age of 91 and is accurately memorialized by the Project of Government Oversight (attached below).  Riccioni was a brilliant eccentric who believed in and acted on his ideas, often to his own detriment.  It is a testimony to a somewhat healthier time that he was never accused of treason — but he was exiled to Korea (the American equivalent to Siberia during the Vietnam years) for his advocacy of larger numbers of smaller, lower cost, higher performing fighters.   Riccioni was a founding member of the dreaded Fighter Mafia, an informal group of like minded individuals whose membership included Colonel John Boyd, Pierre Sprey, Chuck Meyers, and Tom Christie.* Against  all odds, the Fighter Mafia changed the character of fighter/attack aviation in the Air Force and Navy in the 1970s and postponed for 30 years the aviation death spiral that, in the absence of their kind of “eccentric” countervailing force today, is reasserting itself with a vengeance — at even higher cost to the American taxpayer and by extension the soldiers and marines on the ground doing the heavy lifting.  Yet the example of the Fighter Mafia is still buried up by the defenders of the status quo.
Like his compatriots, Riccioni was a colorful, legendary character: In conversation he often referred to himself in the royal third person — as Riccioni, yet he never pulled rank on those junior to him. I first heard about him indirectly from one of his secretaries during a visit to the Pentagon in 1969 or 1970. Over lunch, she told me she worked for this “spooky” (unnamed) colonel who always carried an arrow, and she did not know why, because he only used it was as pointer in briefings.   Riccioni was in a lifelong battle with one of his dearest friends, John Boyd, over who invented a particular tactical dog fighting idea in the 1950s.  Boyd once called me at 2 AM bragging he was going through is files and  “I got the bastard,” because Boyd found something he had written in 1955 that predated something Riccioni had written by two months. No doubt, given Riccioni’s predilection for writing, Boyd’s gotcha was not the end of the story.  But their “battle” did not prevent Riccioni from writing a beautiful recommendation to help ensure that Boyd, a character of equal eccentricity and brilliance but more prickliness, was promoted to colonel.  Riccioni loved to write … often his controversial technical analyses were embedded in long flowery verbiage that got him into trouble and sometime drove his admirers, like me, nuts.  Boyd loved Riccioni, but he once told me that someone needed to “break Riccioni’s pencil” before Rich committed seppuku with it.
The Air Force (and the military services in general)  would be a healthier and more vibrant place if it learned how to nurture, tolerate, and take advantage of the real contributions and ideas of its eccentrics — thanks to POGO, the life and legend of one the best is brilliantly memorialized below.
————————
* Some writers have mistakenly included my name in the membership of the Fighter Mafia. While all the members are close friends of mine, their work on the lightweight fighter program pre-dated my association with them as a group. 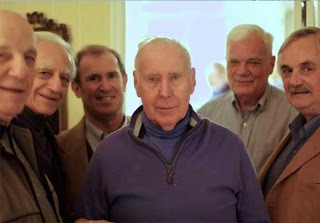 Colonel Everest E. “Rich” Riccioni USAF (ret.) passed away on April 15 in Monument, Colorado, at the age of 91. We at the Project On Government Oversight were privileged to have a fighter aviation expert of his stature as advisor, consultant, and contributor to our work. We will miss the brilliance of his insights, his lucid analyses of airpower and its costs, his dedication to improving national defense while reducing its burden on the taxpayer, his unforgettable, larger-than-life personality, and his passionate advocacy of all things Italian.

To say he was a colorful character is a vast understatement: his business card included Raconteur, Bon Vivant, and World’s Third Greatest Fighter Aircraft Designer. Whether lecturing as a charismatic professor of Astronautics at the Air Force Academy or leading radically innovative aeronautical programs in the Pentagon, he always carried an arrow, both as a pointer and as a reminder of the real fundamentals of war. The Academy cadets loved him for it. The Pentagon generals hated the reminder.

Rich had a long and storied career. He joined the U.S. Army Air Force in 1943, eventually flying C-46 transports on dangerous missions over the “Hump” in the India-Burma Theater, then service-testing newly assembled P-38s, P-51s and B-24s. After a brief stint away to get his aeronautics and mathematics degrees, he returned to the Air Force in 1949. He became a test pilot at the Air Force’s legendary Edwards test base and then an instructor at the Experimental Test Pilot School, the beginning of his lifelong love of teaching. All told, Riccioni flew 55 military aircraft of all types, particularly fighters, logging 5,500 hours in the air over the course of his career.
In the wake of Sputnik, the Air Force selected him for advanced graduate work in Astronautics at MIT, then tasked him to develop and teach the Academy’s first high-level Astronautics course. In four years of inspired teaching, Riccioni left behind hundreds of awestruck, devoted students. After several more stints in fighters including F-100s, F-104s, and F-4s, he was transferred in 1969 to Air Force HQ in the Pentagon to work on F-15 R&D.
There Rich quickly became disenchanted with the unnecessary complexity and large size of the F-15, convinced that its high cost would destroy the possibility of acquiring an adequate number of fighters. Despite the Air Force’s enormous pro-F-15 career pressures, he courageously joined forces with two like-minded Pentagon dissidents, Col. John Boyd, the Air Force’s greatest air-to-air tactics innovator, and Pierre Sprey, the OSD “whiz kid” hated throughout the Air Force for his anti-bombing, pro-fighter analyses. They formed a triumvirate that Rich quickly dubbed the Fighter Mafia, dedicated to producing the most unbeatable, smallest, and cheapest air-to-air fighter in the world. At great risk to his career, Riccioni created and funded the initial covert design program that launched the unprecedented F-16 versus F-17 prototype flyoff competition.

It took five more years of incessant bureaucratic guerilla warfare in the corridors of the Pentagon and the Capitol to shape the design and then nail down production funding, but the Fighter Mafia prevailed: the F-16 became the backbone of the USAF fighter force and the F-17 morphed into the F-18 to become the dominant Navy fighter. It was Riccioni’s proudest achievement but it ended his military career: the USAF Vice Chief of Staff banished him from the Pentagon to Korea and thence to a career-end tour as the commander of the Wright Patterson Flight Mechanics Division, a staid bureaucracy he shook to its roots with his crusading advocacy of supersonic cruise for fighters.
Rich retired from his beloved Air Force in 1976 and started a distinguished 15-year civilian career leading path-breaking design and analysis projects, including supercruising fighters, in Northrop’s Advanced Design department. Retiring from Northrop in 1981, he branched out on his own as an aviation consultant.

Posted by Chuck Spinney at 6:51 AM