The Case for Military Reform -- Again!
Atlantic Magazine has just released the attached essay by James Fallows as its cover story for the Jan/Feb 2015 edition.  It is long, well written, and well argued.  It is also a very important article that is well worth careful reading. 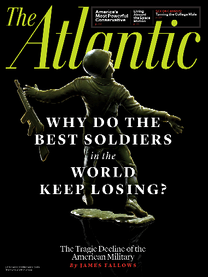 But beware, I am biased, Jim is a long time acquaintance and friend.
I first met Jim in the late 1970s when he was researching his first Atlantic cover story, Muscle-Bound Superpower (October 1979). The important article became the seedling for his even more important book, National Defense, which explained the Military Reform Movement of the 1970s and 1980s — a movement led by the legendary Colonel John Boyd and his merry group of insiders in the Pentagon, the Marine Corps, and on Capital Hill! — of which I am proud to have been one of its earliest albeit junior members.  Without Fallows' efforts, it is hard to imagine how the Reform Movement would have gained the traction it did in 1980s.
Tragically, the reform movement was eventually overrun by the accumulating flood of money that began in the late 1970s and then metastasized into a torrent during the Reagan Administration in the 1980s (although, ironically, reformers were instrumental in reducing the hemorrhage with the passage of the constant dollar defense budget freeze in the mid 80s, spearheaded by Republican Senator Chuck — aka the "Chuckster” — Grassley). Simply stated, reform died because too many people were getting rich and politically powerful from the money flow.
Fallows' new cover story (see below), illustrates the consequences of the enrichment process that unleashed in the late 70s and again in the late 90s.  The attached chart will give you an idea of its size.  By any adjustment for inflation, defense spending has been higher than at any time since WWII, and the war on terror makes the much larger and far greater intensity wars in Korea and Vietnam look puny by comparison.  Yet the Pentagon’s modernization program is in meltdown — something that did NOT happen when the modernization task was for the far larger forces of Korea and Vietnam. 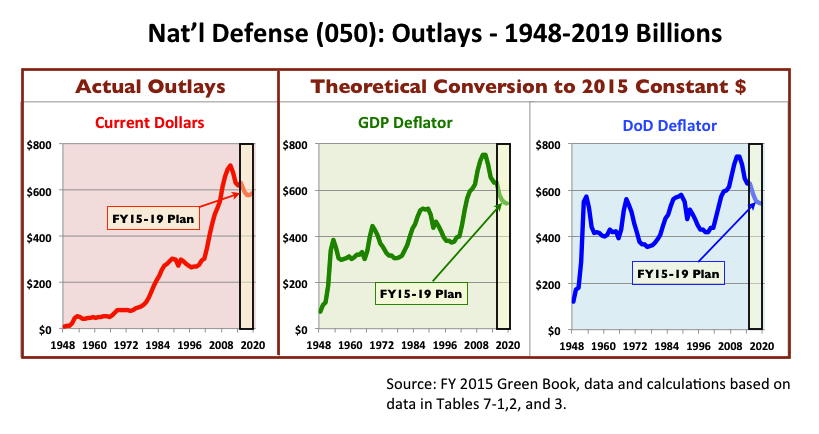 No one can tell you where this money has gone, because the Pentagon’s bookkeeping system is a well-documented, unauditable shambles.
So, written 35 years after “Musclebound Superpower,” Fallows’ latest cover story is indeed a tragic bookend to its predecessor.  Nevertheless, like its predecessor, it should be a call to arms.  But that call to arms will be fruitless until the money question is dealt with forthrightly.
One can only hope that America has learned its lesson.
Perhaps, after a third of century and its run of failed military adventures, together with a programmatic meltdown inside the Pentagon (despite a string of the highest budgets since the end of WWII),  the insights provided by Fallows (again) will help to generate the traction to take corrective action.
But I am not optimistic: A real correction means finding or creating political antibodies to neutralize the cancerous influence of the Military - Industrial - Congressional Complex.  The MICC is the dysfunctional political economy that is the beating heart pumping the money flow.  That is the root cause of the tragedy described by Fallows.  And, it  hard to see how a correction can happen when the sorry state of American electoral politics is juxtaposed to the emergent power of the American Deep State.
But that does not mean we should give up. Kudos to Jim for sending us another wake up call.
Chuck Spinney

The Tragedy of the American Military
The American public and its political leadership will do anything for the military except take it seriously. The result is a chickenhawk nation in which careless spending and strategic folly combine to lure America into endless wars it can’t win.
James Fallows, The Atlantic, JANUARY/FEBRUARY 2015
http://www.theatlantic.com/features/archive/2014/12/the-tragedy-of-the-american-military/383516/

In mid-September, while President Obama was fending off complaints that he should have done more, done less, or done something different about the overlapping crises in Iraq and Syria, he traveled to Central Command headquarters, at MacDill Air Force Base in Florida. There he addressed some of the men and women who would implement whatever the U.S. military strategy turned out to be.
The part of the speech intended to get coverage was Obama’s rationale for reengaging the United States in Iraq, more than a decade after it first invaded and following the long and painful effort to extricate itself. This was big enough news that many cable channels covered the speech live. I watched it on an overhead TV while I sat waiting for a flight at Chicago’s O’Hare airport. When Obama got to the section of his speech announcing whether he planned to commit U.S. troops in Iraq (at the time, he didn’t), I noticed that many people in the terminal shifted their attention briefly to the TV. As soon as that was over, they went back to their smartphones and their laptops and their Cinnabons as the president droned on.
Usually I would have stopped watching too, since so many aspects of public figures’ appearances before the troops have become so formulaic and routine. But I decided to see the whole show. Obama gave his still-not-quite-natural-sounding callouts to the different military services represented in the crowd. (“I know we’ve got some Air Force in the house!” and so on, receiving cheers rendered as “Hooyah!” and “Oorah!” in the official White House transcript.) He told members of the military that the nation was grateful for their nonstop deployments and for the unique losses and burdens placed on them through the past dozen years of open-ended war. He noted that they were often the face of American influence in the world, being dispatched to Liberia in 2014 to cope with the then-dawning Ebola epidemic as they had been sent to Indonesia 10 years earlier to rescue victims of the catastrophic tsunami there. He said that the “9/11 generation of heroes” represented the very best in its country, and that its members constituted a military that was not only superior to all current adversaries but no less than “the finest fighting force in the history of the world.”
If any of my fellow travelers at O’Hare were still listening to the speech, none of them showed any reaction to it. And why would they? This has become the way we assume the American military will be discussed by politicians and in the press: Overblown, limitless praise, absent the caveats or public skepticism we would apply to other American institutions, especially ones that run on taxpayer money. A somber moment to reflect on sacrifice. Then everyone except the few people in uniform getting on with their workaday concerns.
The public attitude evident in the airport was reflected by the public’s representatives in Washington. That same afternoon, September 17, the House of Representatives voted after brief debate to authorize arms and supplies for rebel forces in Syria, in hopes that more of them would fight against the Islamic State, or ISIS, than for it. The Senate did the same the next day—and then both houses adjourned early, after an unusually short and historically unproductive term of Congress, to spend the next six and a half weeks fund-raising and campaigning full-time. I’m not aware of any midterm race for the House or Senate in which matters of war and peace—as opposed to immigration, Obamacare, voting rights, tax rates, the Ebola scare—were first-tier campaign issues on either side, except for the metaphorical “war on women” and “war on coal.”
Video: Why does civilian technology grow ever cheaper and more reliable while military technology does the opposite? An animated explainer narrated by James Fallows.
continued
-----------------------


Supplementary Materials: The Tragedy of the American Military
Additional reading on the subject of The Atlantic’s January/February 2015 cover story
JAMES FALLOWS, The Atlantic, DEC 28 2014, 7:43 PM ET
http://www.theatlantic.com/politics/archive/2014/12/supplementary-materials-the-tragedy-of-the-american-military/384065/
In the January/February 2015 Atlantic, James Fallows argues that a specific example of flawed defense decision-making, under what he calls "Chickenhawk Nation" circumstances, involves the contrasting fates of two military aircraft. One is the Air Force's A-10 attack plane, nicknamed the "Warthog." The other is a multi-service airplane that was originally called the "joint strike fighter" and now is known as the F-35 "Lightning II." The A-10 — which is relatively cheap, highly reliable and battle-tested, and designed for the specific task of flying low and slow over a battlefield so as to support U.S. and allied troops — is being phased out. Much of the money is going to what the article describes as the over-budget, past-schedule, too-complex, problem-plagued F-35.
The article points out that the Department of Defense strongly disputes these views, and says that we will offer links to documents pro and con about these airplanes and other relevant defense issues. Here they are:
I. The Gary Hart Commission memo. As the article discusses, in 2011 Barack Obama asked former Senator Gary Hart, who in the 1980s had been a leader in the “defense reform” movement, to convene a small group and offer recommendations on how a re-elected President Obama might work lasting changes on the Pentagon. Read the summary memo, “Bending the Arc of Military History.”
Hart remained in contact with the administration and in 2014 was appointed a special negotiator for Northern Ireland. But, as the article says, he heard no follow-up on these points.
II. Official arguments in favor of the F-35 and against the A-10
III. Arguments and analyses on the other side, about the importance of the A-10 and the ongoing failures of the F-35
Posted by Chuck Spinney at 12:16 PM