Ukraine: Manna From Heaven for the Green Line and Beyond Crowd

Most Americans know very little about the immediate origins of the crisis in the Ukraine and their government's involvement in it.  They know even less about its deeper roots, that reach back into Russian view of American duplicity in breaking its verbal promises not to expand NATO and the European Union eastward (useful summaries can be found here and here).  These promises were interpreted quite reasonably by the Russians as a quid pro quo for Mikhail Gorbachev’s agreement to (1) the unification of Germany, (2) the dissolution of the Warsaw Pact, and (3) the withdrawal of Soviet forces from eastern Europe. Gorbachev’s dream of a common European Home was always fanciful, but today, Ukraine proves it is in tatters.

If one is to believe the reportage in the mainstream media, the duly elected but decidedly corrupt government of the Ukraine was overthrown by a spontaneous revolt of the freedom-seeking Ukrainian people.  But it is also clear from leaked recordings of phone conversations and the bloviations of U.S. “pro-defense” legislators that members of the U.S. government were at least tangentially involved, as were Ukrainian neo-fascists.

There is much more, however.  This article (also attached below) by investigative reporter Steve Weissman of Reader Supported News is Part 1 in a series of reports detailing the nature of that involvement in the current crisis.  It should be read carefully, because Weissman reveals a mind-boggling maze of tentacles reaching deeply into the Ukrainian regime change gambit.

Even if you dispute some of Weissman's conclusions, the overwhelming assembly of facts  proves a significant level western involvement is in play.  There is one highly convenient coincidence he only alludes to, however: The American people are war weary, and the pivot to the China threat has no real traction.  The domestic politics of fear unleashed by 9-11 are running out of steam.  The possibility of a new cold war with our old nuclear armed adversary is just the ticket needed to rectify the situation by bringing back the politics good wholesome fear that evolved so productively for the American pro-defense nomenclatura during the 40 years of permanent mobilization for Cold War.

A dose of this kind of fear would be especially propitious for the Military - Industrial - Congressional Complex (MICC) at this juncture.  Today, the MICC is haunted by the ‘cost-plus’ specter of a budgetary/force structure/readiness meltdown of its own making.  It must find some way of coping with out-of-control operating costs (read reduce current combat readiness and force structure again) to save the sacred cows in the procurement and R&D budgets, like the F-35, the new long range bomber, etc. -- even if the budget were not cut back!  But the threat of a budget sequester that, ironically, would reduce the defense budget to a ‘high’ Cold War level is now so serious that Mr. Obama found it necessary to send sequester-dodging 5-year defense budget plan to Congress.  The scam as can be seen in this chart, reproduced from page 13 of the Pentagon Comptroller’s FY 15 budget briefing (The red star is the unfunded wish list in FY 15 (a list guaranteed to unleash a horde of porkers in Congress) and the green dotted line is the topline of the 5 year plan.  Bear in mind, this topline does not even include the $79 billion in FY15 plus the $30 billion estimated in each following year to pay for the so-called global war on terror (these add-ons are depicted in the chart on page 2 of the same briefing). 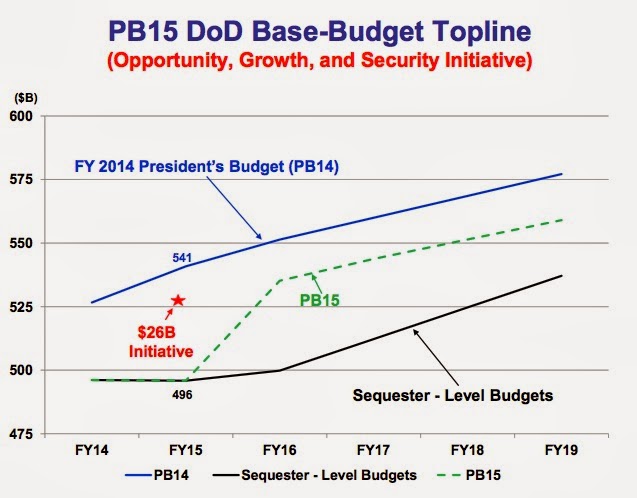 It does not take a conspiracy theorist to see why Ukraine has the champagne corks popping for the "green line and beyond" lobbyists in the gucci-shoed halls of K Street.  I will have more to say on this budgetary nuttiness in later emails -- for the moment, I urge you to read Weissman's report.

Meet the Americans Who Put Together the Coup in Kiev