The China Threat: The MICC Pivots Obama Back to the Future

The report, US model for a future war fans tensions with China and inside the Pentagon, by Greg Jaffe in the Washington Post is an excellent case study of how inside-the-beltway networking by the players in the Military - Industrial - Congressional Complex (MICC).  Jaffe builds a consensus to keep defense spending high when wars end and the terrifying peace dividend threatens to break out. At the center of Jaffee's report is an influence peddling network orchestrated by an ancient artifact of the Pentagon, a futurist named Andrew Marshall, nicknamed Yoda.

Most of the ideas surrounding the all seeing - all knowing - deep-strike precision guided attack systems portrayed in Andy Marshall's so-called Revolution of Military Affairs (its most recent incarnation is the Air-Sea Battle described by Jaffe below) have been around in various forms for a very long time, dating at least from McNamara's electronic line the Viet Nam war, but some of these ideas have conceptual roots in World War II (e.g., the wide area surveillance and close control command architecture of the British air defense system as well as the "precision" weapons programs developed by the US and Germany during WWII).  In fact, readers with a sense of military history will quickly realize that Marshall's ideas are basically a rehash of America's traditional mechanical conception of attrition warfare, especially those ideas underpinning the critical-node theories of strategic bombardment (begun in the 1930s at the Army Air Corps Tactical School), albeit papered over with new fancy sounding acronyms.

Readers with a sense of history will also recall that Obama's pivot to China is hardly a new idea.  It was first floated in the early 90s and promoted  by Senator McCain, among others, in the early maneuvering to keep defense spending high despite the collapse of the Soviet Union. (That maneuvering succeeded, because as the chart below shows, the post-cold war budgets never dropped low the levels of the Eisenhower Administration during the height of the Cold War.)  McCain's maneuvering also led to the law mandating the Quadrennial Defense Review, which to date has produced a series of totally useless reports (for reasons explained here and here) but nevertheless provided rhetorical justifications for continuing Cold War boondoggles like missile defense, the Virginia class nuclear attack submarine, the Army's future combat system, and that turkey of turkeys, the Joint Strike Fighter.

McCain's China gambit did not take root in the early-to-mid 1990s, but fortuitously the civil wars in Yugoslavia, together with Madeline Albright closely-related theory of the U.S. being the world's indispensable power, intervened to help keep the defense budget from plummeting in 1990s.  This was followed by the wars on terror in the first decade of this century, which, triggered by 9-11, provided cover for continuing cold war business as usual in the Pentagon's base budget (remember, the war itself was funded off line via 'emergency' supplemental appropriations).  But now, with the emotive power of Iraq and Afghan distractions winding down, the China threat is rising again, like a Phoenix, to fill the vacuum, thanks in part to the networking skills of Marshall and his proteges, as detailed by Jaffe.

The China pivot is crucial to the MICC's plan to turn Mr. Obama into the biggest base-budget spender since Ronald Reagan, as shown in the figure below (the effects of inflation have been removed): 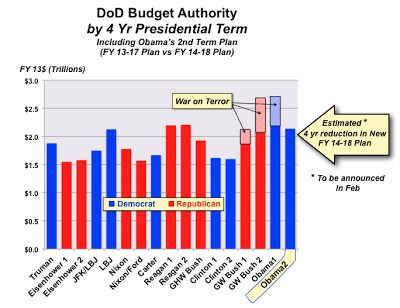 In contrast to Viet Nam and Korea, the so-called war on terror has been funded by supplemental appropriations (added to the base (i.e., non-war) budget. These supplementals are depicted by the lightly shaded areas above the solid bars, which represent based budget totals).  In terms of base budgets only, this chart shows that Obama's four past base budgets plus the next four years of his planned base budgets would exceed those of any president, including George W. Bush (who to be fair, paved the way for the Obama cornucopia), with the sole exception of President Reagan.

Justifying far higher budgets than those averaged the Cold War is the central function of the China pivot.

Jaffe's report provides a good window into how a network of inside-the-beltway interests among players in the Pentagon, Congress, and so-called think tanks that have already convinced the ever malleable Mr. Obama into falling for the China Pivot. The next steps will be hype the politics of fear to sell it to the American people by inflating the China threat to convince them to  pay for the Revolution in Military Affairs by sacrificing a big part of their social safety net, because many the same people are telling us that uncontrolled federal spending is also threatening to destroy the United States.

Posted by Chuck Spinney at 9:40 AM