F-35: Out of Altitude, Airspeed, and Ideas — But Never Money 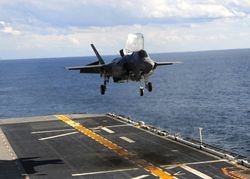 
No program better illustrates the pathologies of the weapons acquisition process as it is currently practiced by the Military – Industrial – Congressional Complex (MICC) than the entirely predictable, and in this case, predicted, problems dragging the F-35 Joint Strike Fighter into a dead man’s spiral.
The F-35 in on track to be the most expensive program in the history of the Defense Department, and it has repeated just about every mistake we invented since Robert McNamara concocted the multimission, multi-service  TFX — a program conceived with the same kind of fanciful one-shoe fits all imaginings as the F-35.
Technical problems, cost overruns, and schedule slippages caused the TFX to implode into one of the most infamous debacles in Pentagon’s history. The result was the super-costly single-mission (deep strike), single service, swing-wing F-111. Planes were delivered without mission essential avionics and sat on the runway for two years awaiting parts. Production rates were slowed and total production quantities were reduced from 1,500 to 500.  That cutback would have worked materially to wreck tactical fighter aviation in the Air Force, had it not been for the intervention of a brilliant iconoclastic band of military officers and civilians, who became known in the Pentagon and industry as the Fighter Mafia (their exploits are described here).
The Fighter Mafia began its operation by saving the F-15 from going down the same pathway to swing-wing oblivion as the F-111, and then conceived the lower cost, high-performance F-16 and the lethal A-10 attack aircraft.  Together these three airplanes were produced at sufficiently high production rates to modernize and expand the tactical fighter force in the late 1970s through the mid 1980s — something not achieved by any other major category of force structure.  Ironically, the bulk of these airplanes were purchased with money appropriated during the Carter Administration.  Costs skyrocketed and production rates declined as soon as the Reagan Administration began to flood money into Pentagon, because the contractors loaded these planes with bells and whistles … and raised prices, sometimes quite arbitrarily, according to official data I assembled while working in the Pentagon in the 1980s.
Today there is no Fighter Mafia to rescue tactical aviation form the predators in the MICC.  But the boondoggles remain: Like the ill-fated TFX, the F-35 is planned to be produced in high quantities for all three services.  Like the TFX, the future of fighter aviation is dependent on the high F-35 production rates.  Like the TFX the F-35 has suffered from chronic requirements creep, technical problems (engineering change proposals are now flooding in like water going over Niagara Falls — an official summary of the current technical problems can be found here).  Like the TFX, the F-35 is suffering severe cost overruns, and horrendous schedule slippages as production rates are cut back.  And like the TFX, the F-35, now entering its sixth year of low rate production, was put into production way before before its technical/cost problems were solved, a process known as concurrent engineering and manufacturing development that guarantees  costly backfits and/or specification relaxations (known in the trade as ‘managing to a rubber baseline).
But the F-35 program is not at serious risk, despite all the hysterical hype in the trade press — not by a long shot.  The F-35′s political safety net has been front- loaded and politically engineered (the general practices of the power games are explained here)  with exquisite malice of forethought.  Domestically, the F-35 employs 130,000 people and 1300 domestic suppliers in 47 states and Puerto Rico.  The only states missing the gravy train are Hawaii, Wyoming, and North Dakota.  Internationally, there are already cooperative development/production plans involving nine countries, and more are in the offing. Given the intensity of the geographic carpet-bombing of contracts around the globe, can there be any question why the Secretary of the Air Force said in September, “”Simply put, there is no alternative to the F-35 program. It must succeed.”  If you think that is an accident, dear reader, I have a Brooklyn Bridge to sell you.
I will be writing more about many of these problems in the future, but today I want to concentrate on the gold-plating process at the front the end — by introducing a remarkable discussion of requirements creep.
At issue is the short take off and vertical landing (STOVL) F-35B for the Marine Corps to replace its AV-8B Harrier jump jets and its F-18C/D fighter/bombers.  My friend Bob Cox, a senior reporter for the Fort Worth Star-Telegram posted an amazing entry by a serving Marine on hisblog.  Cox has given me permission to reproduce it below.
In addition to being a thoughtful critique, it is an inspiring example of an officer’s integrity on the one hand and a telling discussion of the problems with the basic STOVL requirement the Marine Corps is wedded to, on the other.  I have heard many Marines utter similar critiques in hushed tones behind closed doors since the late 1970s, but few have stated them openly.  This requirement is not a minor issue, because the STOVL specifications have caused untold compromises in the already heavily compromised F-35 design.  After reading it, I urge interested readers to check out commenters’ reaction to the Marine’s assertions at this link. Attached herewith is Cox’s blog entry:

Occasionally someone in the active duty military has the courage to go off the script and say what they really think about their service’s dogma and pet projects.

Here’s a piece by a Marine aviator questioning the value and purpose of the Marine Corps love and commitment to the STOVL fighter-attack airplane, the Harrier and now the costly and complex F-35B.

Other analysts and experts have said it before, probably some Marines too, but in his blog “Boats Against the Current,” Peter J. Munson, an active duty officer and KC-130 commander, lays out much of the case against the F-35B. Marine generals love to argue it gives them the capability to go fight close to the front lines, without air bases, but never bother to add how many truckloads of fuel and supplies and men and defense weaponry will have to be hauled over land to that forward base, and at what cost and vulnerability to enemy attack.

The Harrier has surely been a large part of Marine aviation since 9/11, but its STOVL characteristics were rarely, if ever, critical to the conduct of operations. If anything, the capability was a liability when it came to the requirement for long on-station times, multiple ordnance options, and tedious scanning of compounds and cities with targeting pods in support of troops on the ground.

While Harriers have conducted some forward rearming and refueling at shorter strips, these were more driven by the Harrier’s limitations and the desire to validate its expeditionary capability than a value added to the fight. That is, while a Harrier was rearming and refueling, a Hornet would be overhead, sensor still on target, refueling from a KC-130, more weapons still on the wing.

So, when the program hits a rough spot again, which I think it will, and when the budget adjusters come knocking, the Marine Corps needs to be honest about how much STOVL capability it really needs to maintain its close air support capability aboard amphibious shipping, how soon unmanned aerial systems can fill that gap, and what the best option is for the rest of our close air support needs.

One can’t help but suspect that when former Defense Secretary Bob Gates put the F-35B on probation last January that he had some of these same arguments in mind, but didn’t want to fight a war with the Marines in his final months in office. Secretary Panetta last week swooped in and freed the “B,” winning friends in USMC HQ and Lockheed Martin, among othe places.

The extraordinary complexity and demands of the F-35B have undoubtedly hampered the whole F-35 problem, creating technical problems and sucking up limited (in Pentagon terms) development dollars and engineering resources. The need to redesign the whole aircraft (all three models) to take out weight was largely an effort to salvage any combat payload for the B-model. Now, with the airframes of early planes showing cracks and wear and tear early in their lives one has to wonder how much of those and future problems will be due to weight reduction for the F-35B.
- Bob Cox