Is Iraq Headed for a Crackup?


The attached report by Patrick Cockburn, one of the best reporters now covering the Middle East, describes the growing tensions in Iraq over the question of sharing its oil wealth among its constituent regions. Specifically, Exxon is cutting an independent oil drilling deal with the Iraqi Kurds in northern Iraq despite the objections of the Iraqi central government in Baghdad.  Although Cockburn's report is important in its own right, and I urge you to read it carefully, the implications become even more ominous when they viewed in a larger historical context:

The long view of history is likely to record the greatest 'sins' of Iraq, Iran, and Libya prompting interventions by the West have been related to the control of oil -- not nuclear weapons; not any communist leanings during the Cold War; not support of worldwide terrorism.

Each country committed the unforgivable sin of being governed at one time by nationalistic leaders who believed the oil under each country belonged to that country and should be controlled by the government of that country -- therefore, these leaders had to be removed:
One short-term common denominator in these imposed regime changes was that, regardless of how the regime change was justified or rationalized, the nationalist leader was replaced by a more compliant government that agreed to an opening of that country's oil fields to exploitation by privately owned western oil companies.

While history does not repeat itself, memories of the past do condition events in the future.  Over the longer term, perceived wrongs are not forgotten, and such interventions can provoke blowbacks, which in turn provoke counteractions that further enmesh the intervening party in a growing welter of increasingly complicated conflicts.

In the case of Iran, for example, the 1953 coup eventually backfired in 1979, when  Reza Shah Pahlavi was overthrown by the Islamic revolution led by the Ayatollah Khomeini.  Khomeini then established a regime retook control of Iran's oil fields, among other things.  But the Iranian game is not over, and the historical pattern of move and countermove is in play, with the nationalist (Islamic) regime of Iran again in the West's crosshairs, allegedly because of its nuclear ambitions and support of international terror.  Nevertheless, the glittering temptations of re-privatizing Persian oilfields are lurking in the background, attracting the private oil interests of the West like flies to honey.

It is too early to tell if or how blowback will unfold in Libya or Iraq, and the histories, cultures, and the unfolding conditions in these countries are very different from those in Iran.  The privatization of Libya's oil fields is just beginning.  On the other hand, as Cockburn points out, a process of divide-and-conquer privatization is well underway in Iraq; and it is already creating potentially explosive ramifications.

Furthermore, in Iraq, the potential for a regional blowback from the privatization of Iraq's oilfields is complicated by the unique detritus left over from the destruction of the Ottoman Empire, including the hypocritical colonialist assumptions implicit in 1919 Versailles Treaty, the empty promises of Woodrow Wilson's 14 Points, and the nationalist assumptions implicit in the 1923 Treaty of Lausanne  (see summary & text) which established the boundaries for the modern Turkish nation -- which in fact were a fait accompli imposed on the Allies by the stunning military accomplishments of Kemal Ataturk. In so doing, Ataturk (1) nullified the cynical Anatolian partition plan envisioned by the Allies in their stillborn 1920 Treaty of Sèvres and (2) forced the British to renege on their promise to give the Kurds an independent nation in what is now southeastern Turkey (but significantly the British did not include the oil rich Kurdish regions in Iraq in their promise of Kurdish nationhood), among other things.

Thus the Exxon maneuver has the potential for inflaming the still unresolved Kurdish Question is all sorts of ways.  The the map hints at this complexity by telling use Kurds live,  and interested readers will find a short but excellent historical summary of the Kurdish question here. 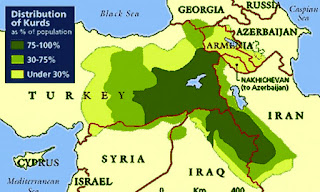 There are 20 million or so Kurds, and they are probably the world's largest ethnic group without their own nation.  While they are a tribal based society, and are by no means unified, their nationalist aspirations and minority rights have been ignored -- sometime brutally -- since the Treaty of Lausannne nullified the question of Kurdish statehood.  This has been true especially for the areas now encompassed by eastern Turkey and northern Iraq, but oppression has also occurred in Syria and Iran.

The 2003 invasion of Iraq reinvigorated the Kurds' separatist ambitions once again.  But this time, the ambitions are being fueled by the oil wealth described below by Cockburn.  The emergence of an economically viable Kurdish nationalism changes the separatist game fundamentally.  Moreover, the increased the restiveness of the outlawed Kurdish Workers Party (PKK) in Turkey despite Turkeys recent efforts to accommodate itself Kurdish demands, threatens to spill over to destabilize and provoke violent reactions in Turkey as well as Iraq (see here for a recent example of this dynamic in action) -- and perhaps even Iran and Syria.  Interested readers can go here for a contemporary Turkish point view or here for a contemporary Kurdish point view on the separatist question.

If there is one thing the Wars of the Yugoslavian Succession ought to have taught the sclerotic elites shaping US foreign policy in the post-cold war era, it is that breaking up an ethnically diverse country previously held together by an iron hand does not necessarily improve protections of minority rights.  Just ask the Serbs in Northern Kosovo who have roots roots in the region reaching back a thousand years whether or not Kosovo's independence has improved their lot in life.

My guess for the future of Iraq and its immediate environs: Add oil to this volatile Kurdish Question, and we ain't seen nuttin yet. And that, dear reader, is why, if you have not already done so, you ought to read Cockburn's report.

Published on Friday, December 9, 2011 by The Independent/UK

Exxon's Deal with the Kurds Inflames Baghdad
The oil giant has defied Iraq's government by signing up to drill in disputed territory
by Patrick Cockburn
http://www.independent.co.uk/news/world/middle-east/exxons-deal-with-the-kurds-inflames-baghdad-6274452.html