Are Republicans or Democrats Better for the Economy?

http://www.theatlantic.com/politics/archive/2011/02/are-republicans-or-democrats-better-for-the-economy/70835/
[Earlier posts on this subject are here and here.]

This is my last post as guest blogger for Jim Fallows and I want to thank Jim and Justin Miller [of the Atlantic web team] for the wonderful opportunity to be a guest blogger.  It has been a fun gig, but quite frankly I am running out of steam.  But life is an interplay of chance and necessity, and serendipity has just offered up a chance for a final blast.

For several years now, I have been in an analytical battle with an official in the Department of Defense over the question of whether Republicans or Democrats are better for the economy.

Newk A. Mineshaftgap is the pseudonym of a senior career official in the Pentagon, with a civilian rank comparable to that of a general in the military. He must remain anonymous for policy reasons -- to borrow from the insightful reasoning used by President Merkin Muffley in Dr. Strangelove,  Minesthaftgap cannot get into a policy fight, because he works in the "the war room."

I can tell you this: Newk has a PhD in physics, but he is not a geek.  In fact, he is a bit of polymath, with wide ranging interests, including nuclear weapons, ballistic missile defense, battleship and tank design, global warming and carbon default swaps, economics, and the development of metrics for measuring the quality of medical doctors.   I have known Newk for about 20 years and consider him to be a good and most interesting friend with solid if somewhat eccentric instincts.  Politically, I would categorize Newk as an independent with libertarian biases.

So, as my last blast, let me offer the following link [PDF]  to Newk's latest report on whether Republicans or Democrats are better for the economy.  For a knuckle dragger from the Pentagon, his conclusions might surprise you.
___
[Jim Fallows note: Here's one sample from the paper, a chart on overall economic performance during post-World War II presidencies. Click for larger and more legible version. The percentage figures -- eg, "Clinton (62.5%)" -- are weighted calculations of how much control Democrats had of government policy during a given Administration. One hundred percent means that the Democrats controlled the White House and both Houses of Congress through the entirety of an Administration, as was the case for both John Kennedy and Jimmy Carter. Zero percent (which did not occur in this period) would mean complete Republican control of the White House, the Senate, and the House. A party gets 50% for holding the White House, and 25% for control of each House of Congress, pro-rated for years of control. For further details, check the paper, where you'll see many other explanations of how economic well-being should be assessed. Very interesting conclusions indeed. 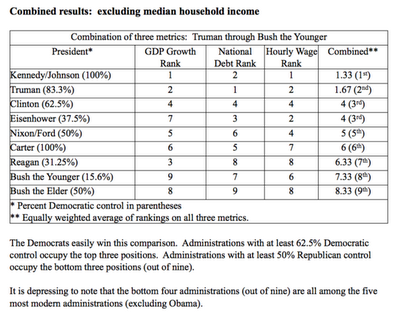 Posted by Chuck Spinney at 1:27 PM