Reinventing Guns and Butter Politics for the 21st Century


Chuck Spinney
The Center of American Progress (CAP)  is a prominent Democratic 'think tank’ in the Hall of Mirrors that is Versailles on the Potomac. The CAP brands itself by saying it is "dedicated to improving the lives of Americans through progressive ideas and action." The Center also claims it presents a liberal viewpoint on economic issues. Its blog, inaptly named “Think Progress," is widely read among avant guarde ‘progressives.’

The blog and the CAP itself are quite useless for people trying to understand the real issues at stake for what remains of the old Democratic coalition put together by FDR and how the Democrats placed themselves on a pathway to their own self-destruction by evolving neoliberal responses in the 1980s (like the Democratic Leadership Council) to the wedge issues first exploited by Richard Nixon.  That is because the CAP is really a political front for the progressive apparatchiks in the emerging Clinton neoliberal oligarchy.  The CAP’s founder John Podesta, a long time Clinton aide, is managing Hillary Clinton’s campaign for president.  The current CAP president, Neera Tanden, is a long time Clinton confidant and advisor.
The independent investigative journalist Glenn Greenwald just exposed (attached below) the mentality of the people who are running the CAP.  That mentality is made evident by their own words, expressed in emails leaked by someone inside of the CAP to Greenwald.  The emails describe the CAP’s obsequious pandering to Israeli Prime Minister Netanyahu and AIPAC.  This is to be expected, of course; and the pandering is the primary focus of Greenwald’s report.  That said, the cynical distancing of CAP and Ms. Clinton from a sitting Democratic President is worse than even the most jaded readers of the Blaster might expect.
But one 2011 email sequence is even more revealing of the CAP mentality, IMO:  CAP staffer Faiz Shakir questioned whether it would be politically or morally wise for the United States to force Libya to use its oil revenues to reimburse the United States for our bombing and “liberating” of Libya.   Ms. Tanden’s slam-dunk counterargument says it all.  Both emails are reproduced here ... 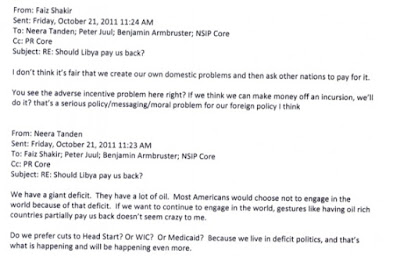 click on figure for larger size
There you have it: A “liberal progressive's" mutation of guns and butter politics for the 21st Century!
Ms. Tanden thinks we should make the countries we bomb use their oil wealth to reimburse us for the cost of bombing them.  That way we don’t have to cut Head Start, food stamps, or Medicaid.
This is an insensitive policy wonk’s version for what we in the Pentagon used to call a “self licking ice cream cone.”  It is necessary, Ms. Tanden asserts, because we live in an era of intensifying "deficit politics.” This is a brand of politics that neoliberal Democrats brought upon themselves by going along with Reagan tax cutting and defense spending policies, increasing privatization since the days of Jimmy Carter, and Mad King George’s pre-9-11 reckless tax cuts and defense increases in 2001*.
More importantly, according to Ms. Tanden, forcing bombed countries to reimburse us for our bombing is a way to use the indispensable power of the United States (to borrow a term of diplomatic art coined by Bill Clinton's Secretary of State Madeline Albright), “to continue to engage in the world.”
But there is more to Tanden's vision.
Consider, please, the possibilities inherent in its elegant symmetry: Using war to fund social programs effectively synthesizes (1) the neoconservative impulse to wage war on everyone with, (2) the tenets of neoliberalism, and (3) what remains of the US welfare state.   Like Bill Clinton’s theft of the NATO expansion issue from Bob Dole in October 1996 during the last month of the presidential election, Tanden’s vision pulls the rug out from under the warmongering nutcases on the right, while placating both the money lust of the Military - Industrial - Congressional Complex and the humanitarian interventionists on the “left," but it also panders to what's left of the old time social liberals who have been dealt out of the game since the days of LBJ.
This is a transcending vision of neoliberal triangulation politics on a grand scale, far beyond the wildest imaginings of Bill Clinton’s Triangulator-in-Chief, Dick Morris, who said triangulation meant "the president needed to take a position that not only blended the best of each party's views but also transcended them to constitute a third force in the debate.”
That is how “think progress” relates to the moral, mental, and material progress in the Hall of Mirrors.
————
* Readers would be wrong to think that the Pentagon’s huge budget increases were triggered entirely by 9-11.  As this paper shows on pages 2-3, most of the increases were already planned and in the Pentagon’s computers by the end of July, 2001, well before 9-11.  To be sure, the Pentagon and the Bush Administration exploited the hysteria triggered by 9-11 to ratchet the budget beyond this projection of the Global War on Terror’s initial cost estimates projected in the figure.
———————————
Leaked Emails From Pro-Clinton Group Reveal Censorship of Staff on Israel, AIPAC Pandering, Warped Militarism
Glenn Greenwald, The Intercept, Nov. 5 2015, 2:04 p.m.
https://theintercept.com/2015/11/05/leaked-emails-from-pro-clinton-group-reveal-censorship-of-staff-on-israel-aipac-pandering-warped-militarism/
(updated below)
LEAKED INTERNAL EMAILS from the powerful Democratic think tank Center for American Progress (CAP) shed light on several public controversies involving the organization, particularly in regard to its positioning on Israel. They reveal the lengths to which the group has gone in order to placate AIPAC and long-time Clinton operative and Israel activist Ann Lewis — including censoring its own writers on the topic of Israel.
The emails also provide crucial context for understanding CAP’s controversial decision to host an event next week for Israeli Prime Minister Benjamin Netanyahu. That event, billed by CAP as “A Conversation with Prime Minister Benjamin Netanyahu,” will feature CAP President Neera Tanden and Netanyahu together in a Q&A session as they explore “ways to strengthen the partnership between Israel and the United States.” That a group whose core mission is loyalty to the White House and the Democratic Party would roll out the red carpet for a hostile Obama nemesis is bizarre, for reasons the Huffington Post laid out when it reported on the controversy provoked by CAP’s invitation.
The emails, provided to The Intercept by a source authorized to receive them, are particularly illuminating about the actions of Tanden (right), a stalwart Clinton loyalist as well as a former Obama White House official. They show Tanden and key aides engaging in extensive efforts of accommodation in response to AIPAC’s and Lewis’ vehement complaints that CAP is allowing its writers to be “anti-Israel.” Other emails show Tanden arguing that Libyans should be forced to turn over large portions of their oil revenues to repay the U.S. for the costs incurred in bombing Libya, on the grounds that Americans will support future wars only if they see that the countries attacked by the U.S. pay for the invasions. … continued
Posted by Chuck Spinney at 3:22 PM