Stalingrad on the Tigris: The Kobani Model Writ Large?

Last summer, in a scene reminiscent of Lawrence of Arabia, the 350,000 man Iraqi army, trained and armed at an expense of $25 billion over a 10 year period by the US, collapsed in a few short weeks after being blitzed by a few thousand, lightly armed, fast moving ISIS irregulars. The crown jewel in the spectacular ISIS offensive was its capture of Mosul, Iraq’s second largest city, on the banks of the River Tigris, 225 miles north of Baghdad.  Subsequent ISIS operations quickly captured most of the inhabited areas north and west of Baghdad (see map).

On 19 February, CENTCOM announced plans to retake the city using a rebuilt Iraqi army in alliance with the Kurdish Peshmerga army.  If true, the CENTCOM plan to retake Mosul beggars belief for several reasons:

1. To pull this off, CENTCOM must somehow assemble up to 25,000 Iraqi and Peshmerga troops opposite Mosul, then drive out the 2,000 ISIS fighters believed to control the city in a large urban battle.  While the Kurdish Peshmerga forces are near Mosul, they cannot take Mosul alone, because a Kurdish attack would drive the Sunni Arabs remaining in Mosul into the arms of ISIS.  For the same reason, Iraqi forces must include Sunnis as well as Shia’s.  But, the Iraqi forces must march over 225 miles up the Tigris Valley, through ISIS controlled territory, to even reach Mosul.  Such a movement would weaken the forces defending Baghdad and open up the real possibility of ISIS spoiling operations in the south, including attacks on the army’s long exposed lines of communication or even Baghdad itself.  Moreover, how such a power projection and attack by the newly rebuilt and as yet untested Iraqi army could even be launched before the summer heat impedes the massive movement and heavy fighting is a question that boggles the mind.

2. The biggest CENTCOM advantage is airpower.  But airpower is difficult to apply effectively against small units engaged in a big-city urban battle.  Moreover, as any soldier who has experienced urban combat will tell you, the chaotic rubble of urban destruction will increase the defensive power of the ISIS positions.  And … no one knows how many Sunni Arabs remain in Mosul.  Its population numbered 1.8 million in 2008, but about 500,000 fled after ISIS conquered it in 2014.  The population was mostly Sunni Arab, but with Assyrian, Turkmen, and Kurdish minorities. Today Mosul is overwhelmingly Sunni, and as many as a million Sunnis may remain in the city. To be sure, many of these Sunnis hate ISIS, but an attack on Mosul could drive them to support (or not oppose) ISIS.

3. Another large uncertainty is the strength of ISIS. The CIA estimates ISIS forces to number between 20,000 and 31,500, with as many as 20,000 foreigners, while as Patrick Cockburn notes in the attached report, others believe its forces number over 100,000.  Whatever the case, it is clear that ISIS has the sufficient numbers to reinforce Mosul, or more importantly, and more likely in my opinion, ISIS has the forces needed to launch spoiling attacks against weakened Iraqi defense elsewhere, including LOCs and Baghdad.

4. Finally, as Cockburn points out, ISIS is still swimming in resources, with the Gulf oil states still bankrolling it.

Given these complications, which are explained in greater detail below, a natural question arises:  Why is CENTCOM telegraphing its punch?  Why sacrifice surprise in what would be a rapid and audacious deep stroke that depends on surprise?

Some reporters have interpreted the CENTCOM announcement as an effort to out-psych ISIS.  But how?

Perhaps, and I am only guessing, CENTCOM planners believe they can taunt ISIS and hype its arrogance to a point where ISIS forgets why it lost the siege at Kobani.  In this vein, perhaps CENTCOM planners assume ISIS leaders are so stupid, that waving the red flag in front of the bull will enable Iraqi-Peshmerga  ground forces to fix ISIS, while US and allied forces methodically bomb ISIS to smithereens in a gigantic repeat of Kobani.

Let us hope the Kobani model  is NOT part of the psyops operation.  The model does not apply to Mosul.  Kobani was a small city of 45,000 located in the open country.  Mosul, in contrast, is a huge sprawling city with perhaps about a million Sunni Arabs remaining in its environs.  Planners would due well to remember that in August 1942, Stalingrad had a pre-siege population of 400,000, or about half that of ISIS-occupied Mosul.

The Kobani model applied to a siege of Iraq’s second largest city would imply a siege on a sprawling urban scale far larger than the relatively compact city of Stalingrad.  To be sure, destruction would not be as great due to our obvious resource limitations, but the urban battlefield would be far larger than Stalingrad and far more complex than Kobani.

Perhaps more sensible heads will prevail in this psyops operation, because it looks like we are in for a long war.

Private donors from Gulf oil states helping to bankroll salaries of up to 100,000 Isis fighters
Exclusive: In Irbil, Patrick Cockburn hears from a Kurdish official how Gulf oil cash is shoring up the terrorists, and why this, with a divided enemy, suggests a long war ahead
PATRICK COCKBURN, Independent. Sunday 22 February 2015
http://www.independent.co.uk/news/world/middle-east/isis-has-made-many-enemies-but-it-may-be-saved-by-their-inability-to-unite-10061739.html
[Posted with permission of the author]
Islamic State is still receiving significant financial support from Arab sympathisers outside Iraq and Syria, enabling it to expand its war effort, says a senior Kurdish official.
The US has being trying to stop such private donors in the Gulf oil states sending to Islamic State (Isis) funds that help pay the salaries of fighters who may number well over 100,000.
Fuad Hussein, the chief of staff of the Kurdish President, Massoud Barzani, told The Independent on Sunday: “There is sympathy for Da’esh [the Arabic acronym for IS, also known as Isis] in many Arab countries and this has translated into money – and that is a disaster.”  He pointed out that until recently financial aid was being given more or less openly by Gulf states to the opposition in Syria – but by now most of these rebel groups have been absorbed into IS and Jabhat al-Nusra, the al-Qaeda affiliate, so it is they “who now have the money and the weapons”.
Mr Hussein would not identify the states from which the funding for IS comes today, but implied that they were the same Gulf oil states that financed Sunni Arab rebels in Iraq and Syria in the past.
Dr Mahmoud Othman, a veteran member of the Iraqi Kurdish leadership who recently retired from the Iraqi parliament, said there was a misunderstanding as to why Gulf countries paid off ﻿IS. It is not only that donors are supporters of IS, but that the movement “gets money from the Arab countries because they are afraid of it”, he says. “Gulf countries give money to Da’esh so that it promises not to carry out operations on their territory.”
Iraqi leaders in Baghdad privately express similar suspicions that IS –  with a territory the size of Great Britain and a population of six million fighting a war on multiple fronts, from Aleppo to the Iranian border – could not be financially self-sufficient, given the calls on its limited resources.
Islamic State is doing everything it can to expand its military capacity, as the Iraqi Prime Minister, Haider al-Abadi, and the US Central Command (CentCom) threaten an offensive later this year to recapture Mosul. Regardless of the feasibility of this operation, IS forces are fighting in widely different locations across northern and central Iraq. 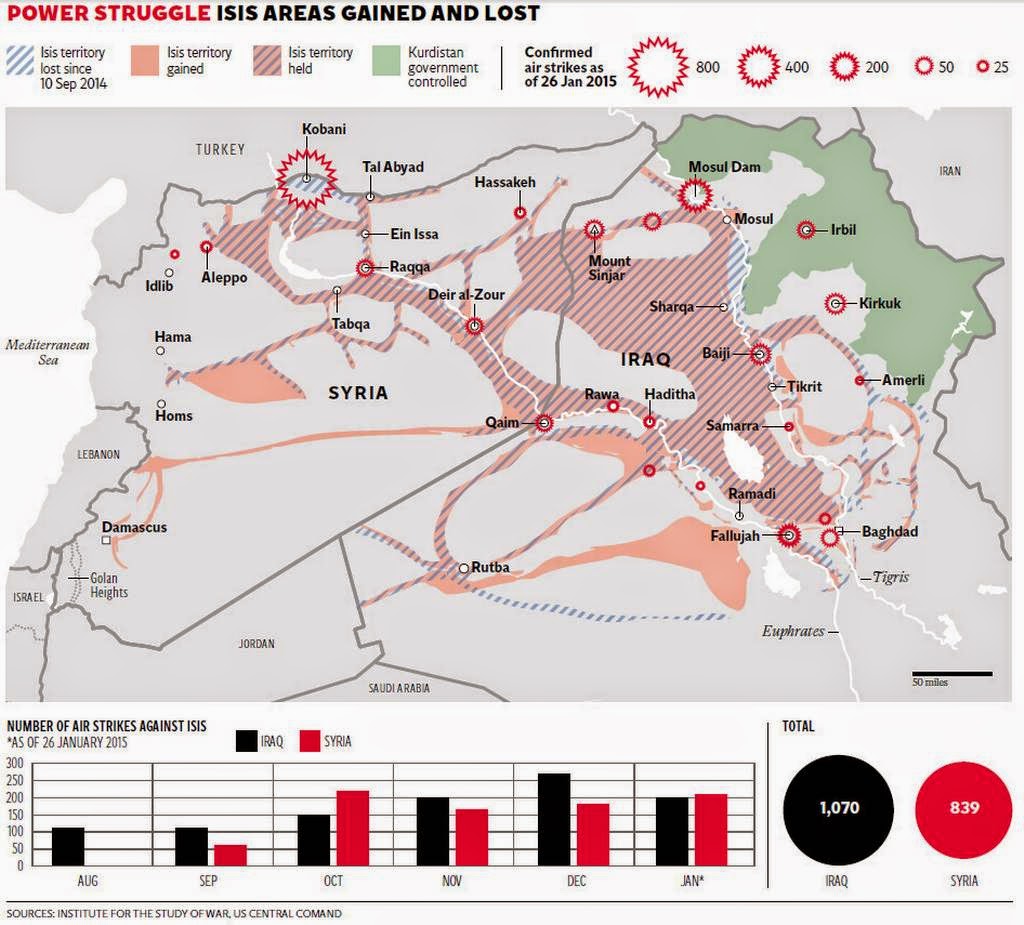 
Patrick Cockburn is the author of The Rise of Islamic State: Isis and the New Sunni Revolution (Verso)
Posted by Chuck Spinney at 12:05 PM