It is obvious that the foreign policy — or grand strategy — of the United States is a shambles of contradictions.
To wit: The end of the Cold War mutated into a pointless expansion of NATO, in direct violation of promises made to President Gorbachev in exchange for the Soviet decision to withdraw from Eastern Europe and acquiesce in the unification of Germany.  9-11 triggered a state of perpetual war, with the US lashing out in a welter of unfocused directions having nothing to do with 9-11, triggering all sorts of unintended consequences. Syria is a case in point:  The US is now fighting ISIS, which emerged from the ashes the US created by its invasion of Iraq — an unprovoked invasion of a country that had nothing to do with 9-11.  At the same time, the US is trying to topple the Assad government, yet the Assad government is the primary bulwark fighting ISIS.  The US is in a de facto anti-ISIS alliance with the Syrian Kurdish forces (PYK), yet the PYK is allied with the Turkish PKK Kurdish forces, and the PKK is on the US terrorist list, not to mention being a contributing factor in the reigniting of the Turkish - Kurdish war that risks destabilizing Turkey.  The United States’ meddling in the Ukraine (and to a lesser extent Georgia and possibly Moldova) has placed the world on the cusp of  a new cold war with Russia, yet the US is pivoting east to confront China in the East China Sea, in effect threatening to drive China and Russia into a powerful anti-American Eurasian alliance.  Likewise, the contradictions in our policies in Yemen, Iran, and Libya serve to enrich this collage of intellectual incoherence.
The lack of focus and overstretch of belligerent actions by the United States are antitheses of sound strategic and grand-strategic thought, which at a minimum involves the determination of focus and intent as well as the disciplined choosing of a harmonious mix of main efforts and supporting efforts to achieve those goals. Moreover, America’s strategic incoherence is bound to increase in the coming year, because the United States just began its quadrennial 24/7 campaign for President, with each of the current candidates (Bernie Sanders possibly excepted — school is out) appealing to the basest domestic impulses in an effort to out-tough all the others in foreign policy.
So, given this state of confusion, it is reasonable to ask: What drives the foreign policy of the United States?
Are US leaders, opinion makers, and the American people simply stupid, as many pol-mil ivory tower intellectuals believe?  If this were the case, then the solution is to put these pol-mil wise men (The Best and Brightest) in charge of rationalizing US foreign policy, and all will be well.
Or, is this incoherence a natural product of a deeper, unseen political-economy that thrives on the chaos it creates?  I am not suggesting a centrally run conspiracy, but the product of a quiet evolution — the emergence of an order without design — brought about by political-economic actors competing and cooperating to influence government policies that feed their self interest at the expense of the national interest.  In this case, the source of the problem would lie in how the chaos confers benefits (money and power) on the factions creating that chaos. If this were the case, America's foreign policy shambles would be a structural reflection of the factionalism in domestic politics overwhelming the checks and balances of the American constitutional design — or, if you will, it would be a 21st Century mutation of the problem spelled out by James Madison in Federalist 10. This idea brings me to the emergence of the American Deep State described here by Mike Lofgren*, a brilliant political historian who spent most of his almost thirty years on Capital Hill as a Republican staffer on the House and Senate Budget Committees.  Lofgren’s trenchant analysis has been expanded into a blockbuster book: The Deep State: Fall of the Constitution and the Rise of a Shadow Government that will hit the stands next January.
For those readers who doubt the hidden hand of the Deep State, I am attaching a superb piece of investigative journalism by Ken Silverstein, entitled “How to Make Millions by Selling War”.   I urge you to read it carefully.  Silverstein describes the shadowy operations of Bruce Jackson, one of those clean cut anonymous Washington insiders and influence peddlers who has made millions for himself and billions for his clients and employers by promoting NATO expansion, the Iraq War, the confrontations with Russia and China, etc.  Although not one American in ten thousand would recognize his name, Jackson and other Deep State operatives like him effectively wield more power than the elected politicians whom they bribe and manipulate into ratifying these destructive and self-defeating policies. The fact that the incoherent foreign policy resulting from their efforts is dragging America into the gutter is of no consequence to the deep state operators in the Military - Industrial - Congressional Complex — which, as Lofgren explains, is but one wing of the American Deep State.
The only way to restore coherence in America’s dysfunctional foreign policy is to follow the money and change its flow.  But most of the Wise Men inside the Beltway who are calling for sanity have no interest in this grubby issue.
Chuck Spinney


* Lofgren is a close colleague and valued friend of mine.

How to Make Millions by Selling War
by Ken Silverstein, Vice.com, September 17, 2015
http://www.vice.com/read/how-to-make-millions-by-selling-war-917
Last September, a man named Bruce Jackson hosted a party for his vineyard's 2014 wines at his 18th-century Chateau Les Conseillans, which sits in the rolling hills of Bordeaux. The afternoon before the party, he took some guests, among them a documentary filmmaker and a former colleague of mine, for a tour of the estate ground, wearing a bland blue suit that matched his mild, drab persona. With his short, carefully combed gray hair, he resembles the conservative columnist George Will, or any number of the people floating around Washington DC's interlocking social circles of foreign policy think-tankers, defense contractors, and lobbyists, which are in fact the exact circles he moves seamlessly in. 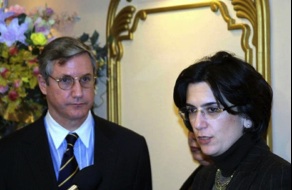 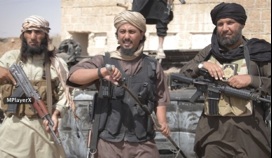 Islamic State fighters are all over Iraq and Syria. Photo courtesy of VICE News
A story the following year in a pro-government Ukrainian newspaper said Jackson—described as a "renowned American expert"—considered Yanukovych to be a determined reformer who was "really tormented by the corruption that is killing his country." Jackson said that people in Yanukovych's administration "aren't really bad people... They are not stone-cold killers."
Jackson was still on Yanukovych's side early last year, after his government killed dozens of protesters and he'd fled to Russia. "What worries him, Mr. Jackson said, is that the new government is too beholden to the people's movement on the Maidan," the New York Times reported in March 2014.
Through it all, Jackson has kept coming back to his French chateau. "We've done pretty well; these are all are Bordeaux trees," he told his guests as he led them through his vineyards. "We... went back to indigenous stuff." He even dreams that his estate might eventually be the site of a famous international declaration. "It's a little pretentious, but someday we'll write a treaty here on something," he said. "And actually, the 'Treaty of Les Conseillians' has a nice ring to it."

When I called Jackson for comment on the nonprofits in February, he declined to give any, other than to say that he was in the process of shutting down the Project on Transnational Democracies.
"We haven't had a grant in two years," Jackson told me before hanging up. In a follow-up email conversation in late April, he said the nonprofit was dissolved.
"It had not received any contributions for at least a couple of years and has not paid salaries since the early years of the last decade," Jackson wrote.
And by the way, a warning about the wine Jackson produces: It's pretty shitty, I'm told by one person who sampled it, so whatever you think of the Iraq War, don't buy it—or anything else he's selling in the future.
Follow Ken Silverstein on Twitter.
Posted by Chuck Spinney at 5:17 PM