The Gaza Siege and the Struggle for Palestine (Part I)


Introduction to the Struggle for Palestine (Part I) by William R. Polk

Siege is the oldest, most primitive, and surest form of warfare, if the besieger has the resources to sustain the  isolation of the besieged.  Therein lies the rub.  For a siege to work, the besieger must seal off the flow of material, energy, and information between the besieged and the outside world.  That takes time and resources.  The starvation requirement also makes siege the most expensive form of warfare.  Not only does a siege consume resources at prodigious rates, the “sunk cost” expenditure phenomenon locks the besieger’s mentality into the game as much as the besieged.  Moreover, the besieger’s task is complicated because necessity is the mother of invention:  The “steady-state” nature of a siege makes it relatively easy for the besieged to orient itself to the nature of the threat and evolve mitigation tactics that marginally lessen the direct effects of a siege.  The mitigation effects prolong a siege's time horizon, thereby forcing the besieger to increase his expenditures.  From time immemorial, such mitigation effects have been seen to build up the moral strength of the besieged, even when they were faced with the certainty of total defeat.  That moral effect makes it difficult for a besieger to end a siege at something less than total victory, because failure can not be hidden if the besieger leaves the battlefield without annihilating the besieged or compelling its unconditional surrender. (The moral effects of Germany's failed siege of Leningrad being a case in point illustrating both the demoralizing effect on the Germans as well as the positive moral effect on the Soviets.)

The latest Gaza War may be a watershed in the Arab - Israeli conflict in the sense that there is a growing world wide revulsion at Israel’s thuggish behaviour.  Israel may be winning tactically, but is losing grand- strategically   This is due in large part to modern communications technologies that make it impossible for Israel to stem the flow of information describing the horrific effects of its brutal actions in Gaza. In short, communications technology has made Gaza a leaky siege in terms of the flow of information.  Even in the United States, recent polls hint that a sea change of attitudes may lie in the offing, with a majority of younger Americans being more sympathetic to the Palestinian cause.  Hamas, the besieged fighting force, has staked out a position that has captured the moral high ground — i.e. the Gaza blockade must end, so its people can live normal lives that interact with the world.  Hamas will find it difficult to back away from from this goal.  By putting up a feisty defense, its fighters are becoming gallant heroes to the committed Gazans and Arabs in general, and more importantly, to the uncommitted peoples around around the world.  The fact that Netanyahu recently felt compelled to ask US lawmakers for help in fending off Palestinian claims that Israel was committing war crimes in Gaza is an indicator of how this shifting moral balance is affecting the mentality of the besieger.  Netanyahu, ironically, seems concerned that Israel is fast assuming the role of the Romans at Masada and Hamas the role of the martyred Israelites and apparently fears who will live longer in the popular imagination.

Or consider the tunnels.  With its portrayal of Palestinian tunnels being an existential threat, Israel is both revealing the ingenuity of Palestinian mitigation tactics and exhibiting signs of the kind of hysterical desperation that has effected besiegers from time immemorial: Israel is now consuming resources at a rate that cannot be sustained, yet its only option in searching for a key to victory is to escalate the general level of  barbarity, because the expenditures to date are not having the predicted effect. But escalation requires an expenditure of even more resources that can only be justified by portraying Hamas and Gazans generally as something less than human. (The revolting pictures of Israelis in Siderot gleefully watching the bombing of Gaza illustrates where this mentality leads.) Here again, given the nature of modern communications, all the world is watching.  Moreover, in this particular case, the only way for Israel to obtain the resources is to increase its poisonous intrusion into U.S. domestic politics in a way that becomes more repulsive to more and more American citizens who see the pictures and videos of Gaza.

In short, the Gaza war is creating a very dangerous, increasingly desperate, unstable situation.  And, because war gains a life of its own, this war can escalate along unpredictable pathways.  Will the Gaza siege, for example, spill over into the West Bank by triggering a 3rd Intifada that threatens Israeli settlements?  Will Israel feel compelled to Annex Area C  because its time window for doing so is perceived to be running out?  Bear in mind, Israel already completely controls Area C which comprises 60% of the land in the West Bank and, by driving Palestinians out of Area C, settlers now outnumber Palestinians.  Moreover, Area C provides Israel with access to water in the West Bank aquifer that supplies one third of Israel's water needs.  So, while no one can predict the future, the Gaza siege has increased the potential for a truly bloody, dehumanizing escalation.

Such an evolution would convert the West Bank into a multitude of disconnected, parched mini-Gazas, sealed off and under permanent siege by Israel, as can be seen in the attached UN map — the 'tan' areas are those now under some degree of Palestinian control. 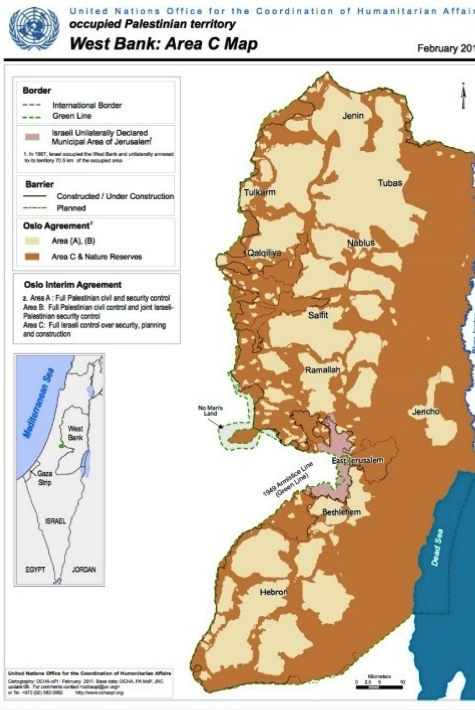 How can this all end?  Multiple sieges in perpetuity? Ethnic cleansing? Genocide?

There are no easy answers to these questions.  At the very least, a lasting solution will require wise statesmanship heretofore lacking by world leaders, backed up by informed and determined citizens who understand the historical roots of this never ending intensifying crisis.

For readers interested in learning more about those roots, this link will take you to Part I of The Struggle for Palestine.  This is the first part of a three part series analyzing those roots.  This is a work in progress, and I will distribute Parts II and III  as they become available.  The Struggle for Palestine as been written by my good friend and well-known historian William R. Polk    He has specialized in the Middle East for over 50 years in academia and government.  The essay is long (10,000 words), but as you will see, the Gaza Crisis has very deep roots indeed.  I urge you to read it.

Posted by Chuck Spinney at 8:57 AM