Cross posted from the Straus Military Reform Website of POGO

The Pentagon's current leadership and most on the House and Senate Armed Services Committees in Congress describe President Obama's 2015 defense budget request as painfully austere, if not dangerously inadequate.  The defense trade press is full of statements from generals, admirals and the other politicians from both political parties that there is not nearly enough money available to buy adequate amounts of new hardware,  maintain current pay and benefits or provide even low amounts of training and equipment maintenance.  As a result, they are looking for ways to relieve the Pentagon from its penury.

The table below details what a careful observer will find in President Obama's 2015 budget presentation materials.  The amounts for the Pentagon are well above the advertised $495.6 billion, and there are several non-Pentagon accounts that are clearly relevant. (The relevant data for 2014 is also presented for comparison, and the notations in the "Comments" column help explain the data.  The table is also available on line here.) 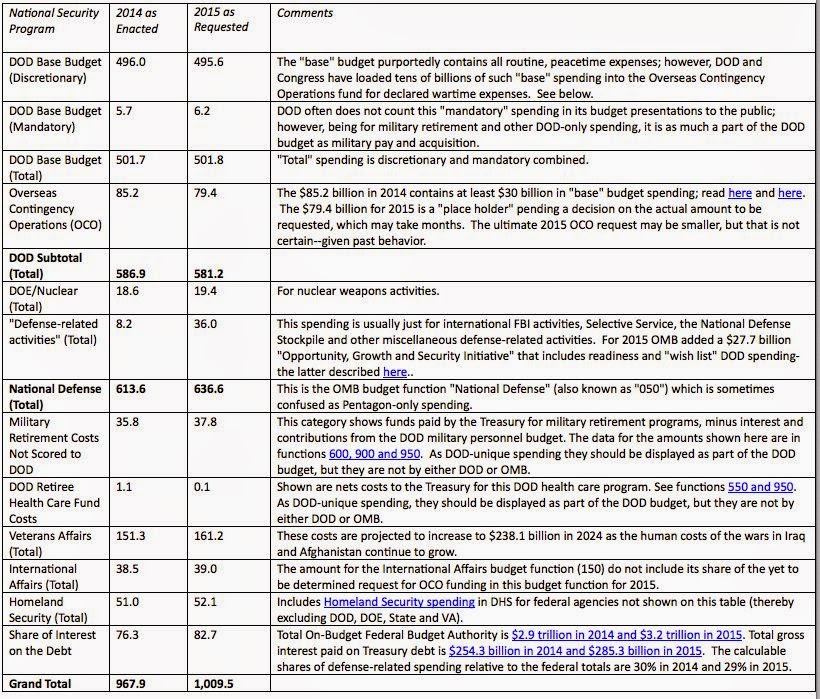 Note the various ways the Pentagon augments its own budget well above the $495.6 billion that is frequently cited by the people seeking more money.

·         There is the additional "placeholder" amount for the wars in Afghanistan and elsewhere ($79.4 billion), which may or may not turn out to be smaller once the formal request for this spending is compiled and Congress is finished fiddling with it: adding huge amounts of non-war (or "base") spending to this account by both DOD and Congress is routine.

·         There is also the $6.2 billion in "mandatory" (or entitlement) spending the Pentagon's complete budget must include for military retirement and other DOD-only programs.

·         There is the Pentagon's $26 billion dollar portion of the "Opportunity, Growth and Security Initiative" (a slush fund if ever there were one) that OMB and Secretary of Defense Hagel have dreamed up--to the applause of the Joint Chiefs of Staff.

·         While some in the press have caught most of the above additions, they virtually never spot the additional money the Treasury pays out for additional military retirement ($37.8 billion in 2015) and DOD healthcare (just $100 million in 2015 but more in other years).

In all, the Pentagon's budget for all of its own expenses in 2015 is not $495.6 billion, it is $645.1 billion, or $149.5 billion (30 percent) more.  If one were to add the nuclear weapons' costs borne by the Department of Energy, the amount would be $664.5 billion, or 34 percent more.  (Don't add the four score billions of dollars for intelligence and snooping; the budgets for CIA, NSA and all the rest are embedded in the DOD budget.)

Consider also the substantial costs that are properly outside of the Pentagon's budget but that are central to US national security:

·         $161.2 billion for the human consequences of past and ongoing wars in the Department of Veterans Affairs, and

·         $39 billion for the activities of the Department of State and related agencies-for international security and the exercise of US power abroad.

With the addition of an equitable share of the interest on the national debt that is attributable to this spending, it all adds up to $1.0095 trillion.  It is that amount, not $495.6 billion, that US taxpayers are being asked to pay out in 2015 for "defense," defined generically.  However, you will not find that number in the talking points of the Joint Chiefs of Staff, Secretary Hagel, or most Republicans and Democrats on the House and Senate Armed Services Committees. They are arguing that times are tough and if still more money can be found, it should go to these accounts.

There is another perspective to measure defense spending in 2015.  We can compare just the amounts formally requested for the Pentagon (the "base" budget plus the "placeholder" amount for Overseas Contingency Operations) to what has been spent historically.  By converting annual Pentagon spending to "constant" (inflation adjusted) dollars adjusted to their 2015 value, and by using the economy-wide GDP measure of inflation for doing so (not the Pentagon's own hopelessly self-serving measure of inflation), we can compare the 2015 Pentagon budget to its post-World War Two history.    See the figure below. (click on figure to enlarge). 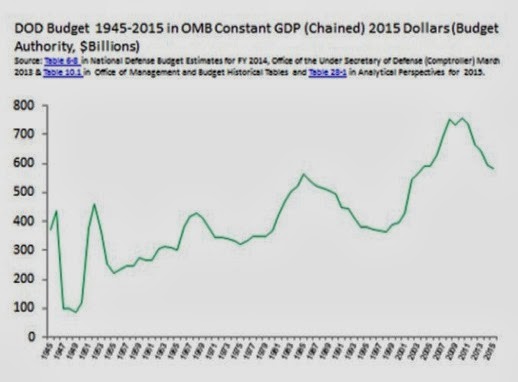 (Those interested to do so can find a historically identical graph in CSBA's 2013 study "Chaos and Uncertainty: The 2014 Defense Budget and Beyond" by Todd Harrison; see Figure 18 on page 25.)
This graph tells us that the 2015 level of Pentagon spending would return us to the same overall level as 2005 when Donald Rumsfeld was secretary of defense and the DOD budget was generally considered flush with money and supporting substantial fighting in both the Iraq and Afghanistan wars.  Note also that this is a level of spending that matches the peak of the Ronald Reagan years that was thought by its advocates to be a US build up so massive it was intimidating the Soviet Union into collapse.  The 2015 level is also an amount that significantly exceeds the peaks of the Korea and Vietnam wars-both of them higher intensity conflicts with hundreds of thousands more US troops deployed than are currently in Afghanistan.

To repeat, the problem is not scarcity of money.  The problem is how it is being spent.  We are getting very little defense--training, maintenance, hardware, and troops--for a gigantic amount of money.  By virtue of how they characterize $1 trillion dollars as penury, our national security leaders in the Pentagon and Congress are clearly incapable of dealing with the problem.

Our equipment is outrageously expensive and yet too much of it is a step backwards in effectiveness.  Since the mid-1990s Congress has bulldozed money into across-the-board pay raises, double pensions for many military retirees, significantly increased benefits for the survivors of World War Two veterans and much else that has much more to do with placating constituencies than addressing 21st century security problems. In addition, the Pentagon's civilian and military leadership has bloated itself to historically unprecedented levels of overhead.  Worse yet, none of them have even bothered to fundamentally understand the dimension of the problems because, under their tutelage, the Pentagon remains unaudited and un-auditable, which will remain the case even after it meets its decades overdue, and embarrassingly modest, financial management goals-which by the way, it will do no time soon.


One more time: the problem is not scarcity of money.
Posted by Chuck Spinney at 1:29 PM