The Report on the Structure of the Air Force

The National Commission on the Structure of the Air Force just sent its final report to President Obama and Armed Services Committees in both the houses of Congress on January 30, 2014.  This glitzy report is over 122 pages long, with its main body being 45 pages, and almost 80 pages of appendices.  Obviously, the report cost hundreds of thousands if not millions of dollars to produce.  Did the American taxpayer get anything of value for this expenditure?  Will the information in this report serve any constructive purpose other than bloating the resumes of the Commission’s members?
The short answers are NO and NO.
Like most blue ribbon panel reports, this one is destined for the dustbin of history.  It ducks even a basic acknowledgement of the most fundamental force structure issues facing the Air Force.  The only effect is to lull the reader to sleep with deadening verbiage.  It that sense, this report is a really pathetic, if all too typical, example of why our government cannot solve its most basic problems.
But the report does have one redeeming value: Its egregious omissions demonstrate the extent to which the collective mind of the American governing elite is disconnected from reality and is talking to itself.
A very simple exercise proves this point: I ask you to take a few minutes to peruse this report; to repeat, it can be downloaded from this link.
Now, for a little background on the problems underpinning the subject this report claims it is addressing: Fundamentally, the Air Force’s structural problems are rooted in its long procurement history of buying ever more technically complex equipment, with each new generation of equipment costing substantially more to buy and operate than its predecessor.  This has caused an economic asymmetry wherein rising unit costs that always grow faster than budgets grow, even when budgets increase very rapidly, as they did in the 1980s and after 1997.
The consequences of the relationship have been well understood for a long time: Weapons increase in complexity, force structure shrinks in size, weapons already in the inventory become older on average, and there is continual pressure to reduce readiness, because increasing complexity reinforces the aging to magnify operating costs further.  The long-established Pentagon’s Power Games accelerate this evolution when budgets increase — the little shop of horrors known as the F-35 Joint Strike Fighter being a recent case in point.
This evolutionary pattern generates important indirect effects as well.  These effects have also been understood for a long time (e.g., see my 1980 report Defense Facts of Life or my 2002 briefing Defense Death Spiral (DS), especially slides 23-50, both which were based on official DoD data).  To summarize the indirect effects:
First, as forces shrink in size, supporting physical infrastructure also shrinks (e.g., via base closures or depot shutdowns); but infrastructure is protected by local political pressures, so it always shrinks more slowly that force structure shrinks.  Consequently, in the case of the Air Force, the bed down of airplanes on bases has become more diluted over time and its depot capacities become more excessive.  These differential rates of shrinkage create cost-growth pressures and institutional rigidities that magnify the evolutionary pattern (DS analyzes this evolution explicitly on pages 49-50).
Second, as forces shrink, organizational infrastructure (i.e., the number of operational units, command structures, headquarters, support services, etc) shrinks at a slower rate.  Command structures become top heavy with a bloated rank structure.  In the case of the Air Force, squadrons have fewer aircraft, wings have fewer aircraft, numbered Air Forces have fewer aircraft.  In short, the increasing organization bloat produces requirements for excessive numbers of Lieutenant Colonels, Colonels, and especially Generals.  The excessive rank overhead, coupled to an “up or out” promotion system, has all sorts of pathological results — e.g., it increases the predilection for micromanagement, over-centralization, bloated staffs, busywork, etc. These evolutions translate into increased costs in peacetime.  Even worse, they increase organization rigidity to slow down decision cycles when the military goes to war (DS, especially pages 34-36). If you doubt this, just look at the tooth-to tail-ratio and bloated command structures in Afghanistan.
To repeat, these problems have been understood for a very long time.  Nor are they impossible to comprehend and explain in a digestible way without glitzy distractions.  Consider, for example, an oped I published in the Washington Post in 1989 — 25 years ago! The subject is changing the force structure to make it more efficient without sacrificing capability.  It gives the reader examples of the kinds of analysis and changes that should have been considered by National Commission on the Structure of the Air Force. (By the way, this Op-Ed was officially cleared by security review in the Office of the Secretary of Defense — and was never rebutted on a factual basis.)

(Bear in mind, the following op-ed shows what was possible during the far more demanding days of the Cold War; such decisions should be easier and would make even more sense today)

Shape Up and Fly Right: How to Build a Better Air Force for Less Money

Of course there in nothing in the Commission’s report that even hints at these kinds of possibilities.
One final point:  We all know the DoD budget is poised to slow its rate of growth and possibly even decline in the short term.  News reports indicate the Air Force’s force structure is poised to shrink yet again, and notwithstanding the huge increases of recent years, the AF has its worst aircraft aging problem in its entire history.  These conditions also apply the force structures of the Navy and Army. 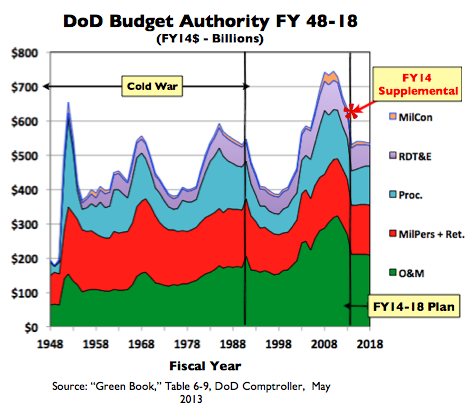 Yet, as this chart shows,  the Pentagon’s Operations and Maintenance Budget (O&M - the green shaded wedge) has exploded since 1997, even if one removes the effects of inflation using DoD’s cooked deflators. Moreover, that O&M budget is poised to remain higher throughout the Pentagon’s peacetime planning horizon out to 2018 than at any time between 1948 and 2000.  Note, this peacetime O&M projection is substantially higher than the O&M budget at the peak of the Vietnam war, yet it will be supporting force structures between 25% and 40% as large as those of the Vietnam War, and it is predicated on low peacetime operating tempos.  Also bear in mind, the out year projection is much higher that that implied by the dreaded sequester.
Put bluntly, the skyrocketing O&M budget means the economic chickens are coming home to roost. (I will have more to say on this in a future essay.)
So, the Commission’s report appeared at a propitious time.  Apparently, the Commissions’s goal was to determine what changes to the force structure and mix of active and reserve forces can help the Air Force cope with future budget constraints.  This necessarily implies dealing with the monstrous O&M problem depicted above.
If the Commission had done its job properly, it might have provided information to help decision makers in Congress and the Pentagon reduce future defense budgets efficiently.  But if one compares the the kind of information in my 25 year old  short op-ed and the official data reproduced in the Defense Death Spiral to the “new” information in the Commission’s report, at least three questions become obvious:
* Is there any new information in the Commission’s report that will help decision makers reorganize the force structure of the Air Force in a way that helps to extract the Air Force from its ever more costly death spiral, especially when one considers the implications of the  the projections in the chart or the budget sequester?
* Or will the Commission’s obvious analytical omissions, merely work to set the stage for a horrendous readiness debacle in the near term, accompanied by the usual cries of a “hollow military,” to be followed by yet another burst of budget growth to bail out the DoD and the Military – Industrial – Congressional Complex?
* Finally, can American taxpayers ever get his/her money’s worth out of government, if their government  continues to waste money on blue-ribbon commissions manned by apprarachiks who produce glitzy reports that paper over real, obvious, and growing problems?
To ask such questions is to answer them; and that demonstrable incompetence, dear reader, is why your Social Security and Medicare are poised to be sacrificed on the altar of the Military – Industrial – Congressional Complex in the name of fiscal prudence.
Franklin “Chuck” Spinney is a former military analyst for the Pentagon and a contributor to Hopeless: Barack Obama and the Politics of Illusion, published by AK Press.
Posted by Chuck Spinney at 2:18 PM