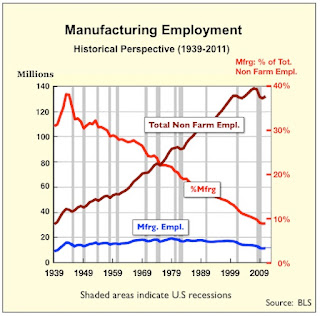 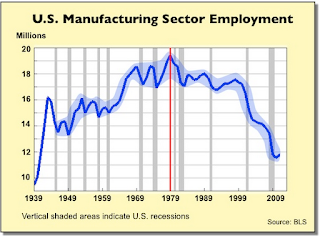 Figure 2
(note the range of the vertical axis is 9 to 20 million)
Figure 2 enables us to look more closely at the blue line in Figure 1 by re-plotting on an expanded vertical scale ranging from 9 million to 20 million employees.  The numbers behind the blue lines in Figures 1 and 2 are identical.   Figure 2 shows more clearly how the dynamics of growth and decline in the manufacturing sector changed over time.  To this end, I added the shaded area merely to give the reader a sense of the how the size of short term fluctuations changed over time.  After World War II, the total number of manufacturing jobs rose in absolute terms from 13 million in 1946 to an all time high of 19.4 million in 1979. This is an astounding number for peacetime, exceeding that maximum of the WWII’s “arsenal of democracy” employment of 16 million by 20%!
The total increase between 1946 and 1979 was of 5.9 million jobs or 44%. After 1979, the total declined to 11.7 million jobs by 2011, a reduction of 40% from a much larger base. What is even more stunning is that employment in the manufacturing sector today is almost half a million people smaller than the 12.1 million employed by the manufacturing sector in January 1, 1941, eleven months before Japan bombed Pearl Harbour, even though the current U.S.  population exceeds that of 1941 by 152 million people!
But there is more that can be sniffed out of Figure 2, now that we have the benefit of 30 years hindsight. The flat growth and wild swings in employment data (indicated by the greater width of the blue shaded area) show this engine of prosperity began to sputter around 1970 (perhaps because of over heating caused by the guns and butter policy in Vietnam ???), before moving into a more coherent pattern of long-term decline after 1979.  So, the 1970s turned out to be a period of transition.  This is hinted at in the pattern of data in Figure 1:  First, note how the pattern of decline became more stable after 1979, with the magnitude of the short term fluctuations being much reduced compared to those of the 1970s.  This stabilization also hints at the introduction of deeper causal factors, but does not tell us what they are.  Note also that no lost ground was ever fully recovered after the peak in 1979.  Each major cyclical short term term peak in employment rose to a level that was less than its predecessor (in one minor case it was about the same).  This is even true for the sustained economic growth period of the Clinton Administration, which Democrats like to compare to the Kennedy-Johnson expansion during the 1960s.  The failure to recover from successive downturns is yet another hint of long-term causal factors.
Regarding these deeper factors, much has been written about de-industrialization, and there is no need to repeat it here.  Suffice to say the onset of the stagnation of middle-class wages in the late 1970s corresponds to the loss of high wage manufacturing jobs in a de-industrializing manufacturing sector, reflected by decline after after 1979 in Figure 2.  The onset of the explosive growth  of consumer debt and the growing inequality of income corresponds with the decline in manufacturing.  For those who drank the kool-aid about the information society displacing the manufacturing society, I note that computers and software industries are included in the employment figures of this chart. Indeed, given the quality of the jobs debate by Mssrs. Obama and Romney, one could argue America has entered the post-information age.
If either Mr. Obama or Mr. Romney is going to turn around the high-wage job meltdown, they need to explain to the American people how their policies will create a new virtuous cycle of expansion begetting expansion, either by (1) reinvigorating the domestic manufacturing sector, which is a proven engine of virtuous growth, or (2) by inventing a new engine of virtuous growth to replace the role that manufacturing served between the end of WWII and the early 1970s.  Creating jobs to flip hamburgers at McDonalds or slosh ice cream at Ben and Jerry’s will not do the trick.  Military Keynesianism — i.e, shoveling money into weapons manufacturing — certainly worked in WWII, and it may have worked more modestly in the late 1940s and the early 1950s, although given the anguish of Eisenhower’s farewell address, my guess is that he may have thought Military Keynesianism created more problems than it solved.  Whether or not that was the case by 1961,  one thing is clear from Figure 2 in this regard: Throwing money at the Pentagon over the last 30 years has been a total bust in terms of stimulating any growth in manufacturing employment, not to mention Military Keynesianism’s complete failure to re-igniting anything remotely similar to a virtuous cycle of prosperity begetting prosperity.
There is a reality-free normalcy now driving American politics.  Both parties would rather fiddle with Karl Rove’s soothing “create-your-own-reality” political meme than douse the ideological fires of neoliberalism that are torching the American economy and impoverishing the middle class. With politics this boorish, is it any wonder that people are tuning out?  A better way for understanding what ails our political class would be to begin with one of the most elegant quotes in Gibbon’s Decline and Fall of the Roman Empire, because as he explained … “Their credulity debased and vitiated the faculties of the mind: they corrupted the evidence of history; and superstition gradually extinguished the hostile light of philosophy and science.”
Franklin “Chuck” Spinney is a former military analyst for the Pentagon and a contributor to Hopeless: Barack Obama and the Politics of Illusion, published by AK Press.
Posted by Chuck Spinney at 5:24 PM