How Successful Was the Marjah Operation?


The winter offensive in Marjah has been portrayed by US authorities as the successful poster child of Nato commander's, General Stanley McChrystal, new counterinsurgency strategy.  Yet some of the information fed to the American public has been misleading, possibly the result of systematic misinformation by the Pentagon designed to convey a false impression of "a large and loud victory" -- the goal of which is to convince the American public of the need for longer war than implied by President Obama's "escalation and then leave" speech.  Moreover, as Gareth Porter pointed out, most reports erroneously depicted Majah as a city of 50-80,000 when, in fact, it is an irrigated rural region made up of scattered farms, hamlets and small villages.


Bear also in mind that General McChrystal telegraphed his punch into Marjah with a public campaign advertising the looming offensive months before it commenced.  Predictably, Taliban melted away to fight another day, leaving lots of land mines (pretentiously called IEDs or improvised explosive devices by the Pentagon), and Nato forces moved in with relatively light casualties and are now spreading out to occupy the region.
Marjah is now off the radar screen that governs perceptions in the sound-byte addicted hall of mirrors that is Versailles on the Potomac.  Yet over the coming months, the  occupation of the Marjah region -- the "hold" part of the "clear-hold-build-leave" counterinsurgency strategy -- will make our forces dependent on long vulnerable lines of communication for supplies and their outposts vulnerable to attacks in detail.


Referring the following map below, the green shaded area, which approximates the arc of pacification in McChrystal's counterinsurgency strategy, gives an idea of you serious these vulnerabilities will be.  It is made of thousands of farm coumpounds, hamlets, and small villages.  Marjah is in the west,  about 200 miles from Qandahar in the east. 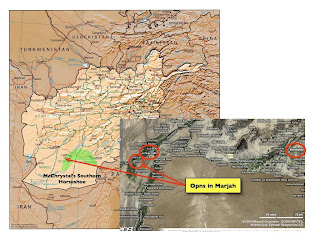 And now .... General McChrystal's headquarters is letting it be known that the next target is Qandahar, a Pashtun majority city of about 500,000 inhabitants (perhaps as many as a million, if one includes the surrounding regions), and remains a violent Taliban stronghold.
Before getting enmeshed in a Qandahar offensive, the scale of which will make Marjah look puny, it might be be wise to have a dispassionate lessons-learned assessment to determine whether or not the outcome of the Marjah operation did in fact provide a stable strategic launching pad for a full blown assault on Qandahar.
The information in the attached report by Chris Sands in the National (UAE) adds importance to this question.
Operation in Marjah ‘jeopardises peace plan’
Chris Sands, The National [UAE],March 15. 2010
KABUL // When US-led forces launched a major attack on a small corner of south-west Afghanistan recently, the operation was accompanied by a blizzard of military activity and media attention not seen since the war began almost nine years ago.
Weeks later, the true impact on Marjah of Operation Moshtarak is starting to emerge. The hype may have faded away, but ...
... the Taliban were still strong in Marjah and had beheaded seven local men, including an imam, for alleged links to the government in the wake of Operation Moshtarak. .... (continued)
Posted by Chuck Spinney at 11:03 AM